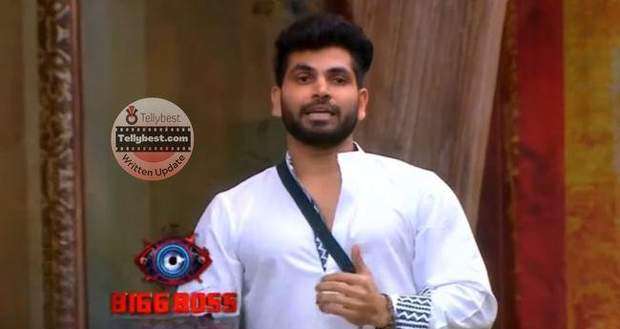 Today's Bigg Boss 16 2nd January 2023 episode (day 94) starts with the Mandali talking to each other and discussing how Tina Datta and Shalin Bhanot's fake drama happened.

Meanwhile, Archana Gautam and Soundarya Sharma also talk about how Tina was clinging to Shalin when she herself burned his picture the previous day.

He hugs her and tells her that she will always be his best friend.

At night, Shalin hugs Tina and Priyanka wishing them a happy new year while Sajid Khan and MC Stan gossip about them.

MC Stan asks if Shalin and Tina were about to kiss while Sajid says that they are just doing it to not be nominated.

Nimrit also comments saying that Shalin and Tina will work together for a year whether they confirm their relationship outside or not.

On the other hand, Archana wishes Bigg Boss a happy new year while she tells Soundarya that Shalin and Tina were shameless as they must have planned their fake romance when they had removed their mics.

Shalin and Tina talk to each other and hug while Nimrit and Sajid say that these dramas won't work for the audience.

Meanwhile, Archana and Soundarya joke around as they laugh and say that Tina's ZeeZee must be getting jealous.

The next morning, all the housemates wake up to the sound of sirens as they go to the garden and sing the BB Anthem.

Sajid and Nimrit talk about how Shalin, Tina, and Priyanka have become a team of three which can never be a team of four because of their drama.

Further, Nimrit sees the onion peels and asks Tina if they are Sreejita De's while Tina says that Archana is the one who did it.

Nimrit and Tina in a cat fight!

Later, when Shalin accepts that it was he who had left the onion on the table.

Tina and Nimrit argue while Nimrit mocks her by mimicking and saying "Stana here is a gift for you."

Tina suddenly gets defensive and tells Nimrit to never talk like that with her.

Afterward, Priyanka tells Tina and Shalin that they should work on their relationship while Tina sits with him and tells him that he should not treat her similarly to everyone else.

Later, Bigg Boss calls Archana and Shiv Thakare inside the confession room and asks them what they saw in yesterday's event.

Bigg Boss does 'Chugli' with Housemates!

They both laugh as they talk about Shalin and Tina's drama while Archana says that she is sure Tina has started her fake love story.

Shiv also says that he thinks they did it seeing the public.

Meanwhile, Archana says that she thinks this is all pre-planned.

Bigg Boss tells the housemates that this week will be the week of Chance.

Bigg Boss tells the participants that Shiv will be the one sitting in the electricity office while only four contestants will have electricity in their houses.

The participants who do not have electricity in their huts will be nominated for elimination.

Bigg Boss says that now the game will start and states that after each buzzer, Shiv will rotate the wheel of chance.

The person selected will become the owner of the electricity department and will get to replace one nominated person with one safe person.

In the first round, Nirmit gets chosen and she saves Sumbul while nominating Sajid.

In the second round, Sreejita gets chosen to become the owner of the electricity department and she saves Priyanka while nominating Sumbul.

Shalin becomes the owner for the third round and he obviously saves Tina while nominating Nimrit.

For the last round, Abdu Rozik gets selected and he nominates Tina while saving Nimrit with the reasoning that he does not understand whether Tina and Shalin are friends or not.

In the end, MC Stan, Nimrit, Priyanka, and Abdu get safe while Tina, Shalin, Soundarya, Sajid, Archana, Sreejita, and Sumbul are nominated.

Tina fake cries as she tells Shalin that he should have played hard while he hugs her and tells her that he tried addressing her as 'Bubba'.

Afterward, Sajid keeps mocking Sreejta and makes her clarify if she talked about him being scared of the nominations.

Sreejita calls Soundarya a Chuglikhor while they both argue with each other.

Later, Bigg Boss calls Priyanka inside the confession room and asks her what she thinks of Tina and Shalin.

Priyanka reveals that she thinks they are faking it while Bigg Boss asks her if Shalin would have saved her today or not.

She says that she knows he would not have saved her and Bigg Boss tells her to make sure that they don't become the top 2 and she has to leave in the second to last week.

Afterward, Bigg Boss also calls Sajid and Abdu inside the confession room and asks them about Tina and Shalin.

Bigg Boss asks Abdu whom he would like to see leave and he says that he would be happy if Shalin leaves.

Nimrit and MC Stan enter the confession room afterward and ask them what they think of Shalin and Tina.

They also say that Shalin and Tina's relationship seems fair while Nimrit also says that she thinks Priyanka is becoming the third wheel in their relationships like how she was with Gautam and Soundarya.

Later, Shalin, Tina, and Priyanka are making fun of Archana while MC Stan tells his Mandali that Ikka told him about him not liking Shalin's drama.

Afterward, Sumbul and Nirmit are making fun of Stan for complimenting Priyanka while Abdu jokes with Sreejita and tells her that he thinks she will leave.

At night, Archana confronts Shalin about his closeness with Tina and dubs it drama for elimination.

Shalin tells them that they also sleep in the same bed but he never doubted them to be lesbians or anything.

Soundarya tells him that he is going wrong while he leaves and jokes about his discussion with Tina.

Meanwhile, Archana and Soundarya go to Mandali and tell them about Shalin's crude remarks while Nimrit says that he is getting cheaper and cheaper as the days go by.

© Copyright tellybest.com, 2022, 2023. All Rights Reserved. Unauthorized use and/or duplication of any material from tellybest.com without written permission is strictly prohibited.
Cached Saved on: Wednesday 25th of January 2023 11:51:15 AMCached Disp on: Thursday 9th of February 2023 05:01:43 AM