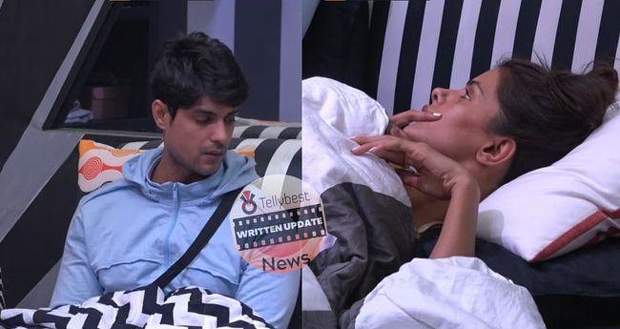 Today's Bigg Boss 16 2nd November 2022 episode (day 33) starts with Priyanka Choudhary telling Ankit Gupta to not expect anything from her while he also replies, emotionless, that he does not have any expectations from her.

Priyanka tells Ankit that he is the one who has brought these changes in her while he tells her to not bring up things from the past.

The fight gets intense with them as Priyanka tells him that they do not exist for each other anymore.

Sajid Khan goes to comfort her while Priyanka vents to him and tells him that Ankit has always been an introvert and that he doesn't need anyone.

At night, Priyanka and Ankit once again get into an argument while he tells her that he will also bring up things from her past which trigger her.

Priyanka starts crying and goes to another room while Ankit goes after her and apologizes to her while back hugging her.

Priyanka tells Ankit to not use the threat of exposing secrets when they are friends and makes up with him.

At night, Priyanka takes Ankit to the side and explains to him that his threatening to bring out her past makes the viewers think that she is hiding something even when she is her true self in the show.

The next morning, housemates wake up and reach the garden to sing the BB Anthem once again.

Archana Gautam sits with Sajid and MC Stan telling him that according to her, Ankit and Priyanka do not have a love angle and are just attached to one another.

Afterward, Bigg Boss calls the BB House and scolds Sumbul Touqueer for picking up the phone after which Bigg Boss informs Gautam Vig that he is fired.

Gautam Vig gets fired again from being a captain!

All the housemates gather in the living room while Bigg Boss bashes Gautam telling him that he took the captaincy to prove his relationship with Soundarya but his relationship is the reason he is getting fired.

Bigg Boss reveals how instead of stopping Soundarya from speaking in English, he supported Soundarya by having conversations with her in English.

Bigg Boss further tells the contestants that he knows they have a lot to say about Gautam-Soundarya which is why they are going to hold a court in the evening.

In the evening, Bigg Boss announces that Ankit and Gori Nagori are judges while Gautam is the culprit.

MC Stan will fight for Gautam while Nimrit will be the opposing party.

As the hearing starts, Bigg Boss says that he has something to say and tells Soundarya to come and stand with her.

Bigg Boss confronts Soundarya and asks her what she whispered into Gautam's ear while removing the mic which is against the rules.

Soundarya makes up an excuse and says that she was just telling Gautam about the elimination and that the housemates are paying what they deserve.

Bigg Boss tells Soundarya that he does not want to hear her excuses and announces her as guilty.

As a punishment, Bigg Boss reveals that they will be no more vegan food with the ration and the ration will also be decreased.

The main hearing starts and Nimrit calls Shalin Bhanot to the witness stand he states that he thinks that Gautam and Soundarya's relationship is fake while giving his reasonings.

Furthermore, Nimrit calls Shiv Thakare to the witness stand and he also states that Gautam and Soundarya are doing the fake love angle to prove what Karan Johar said as false.

Meanwhile, MC Stan calls Soundarya to the witness stand who turns the tables and wins the case.

Afterward, as a reward, Bigg Boss tells Stan that he can distribute half of the ration as per his liking.

Tina and Shaling discuss with Nimrit how the judges were biased toward MC Stan and made him win the task intentionally.

Abdu comes there and Nimrit tells him about the situation while he tells her that he has no opinion on this.

Later, Archana keeps shouting at Sajid to put the dishes in place and he calmly does it while telling her to not shout at him.

Bigg Boss later announces that it is time for the second hearing and fired MC Stan as the defense lawyer while making Soundarya the new defense lawyer.

The accusation for the second hearing is that Gautam-Shalin's friendship is only an act from Gautam's side for the footage.

Elsewhere, Gori confides in Shiv and Stan that she feels neglected after Nimrit's addition to their friend group and how Nimrit is trying to one-up her.

Shiv gives a lame excuse and Stan starts arguing with him while Bigg Boss starts the buzzer announcing the start of the second hearing.

In the second hearing, Sumbul comes in support of Gautam while Nimrit and Tina shut Sumbul's mouth with their statements.

Meanwhile, Nimrit and others argue that Gautam is only keeping the friendship to do a face-off with Shalin and get footage.

Nimrit wins the case and Bigg Boss rewards her by telling her that she gets to distribute the remaining ration as per her liking.

Soundarya argues and says that Bigg Boss is biased because he made Tina a judge.

Later in the evening, Shiv confronts Sajid and asks him if he's angry with him while Gori and Stan also partake in the conversation and reveals that their group is coming out as Shiv's group only as he is the one who initiates all the arguments.

Sajid calms them and makes them hug while Shiv stays that he wishes one of them gets the trophy.

Gautam fights with Shalin by accusing him of being the fake one in their friendship.

© Copyright tellybest.com, 2022, 2023. All Rights Reserved. Unauthorized use and/or duplication of any material from tellybest.com without written permission is strictly prohibited.
Cached Saved on: Monday 21st of November 2022 04:08:28 AMCached Disp on: Friday 9th of December 2022 04:44:35 AM