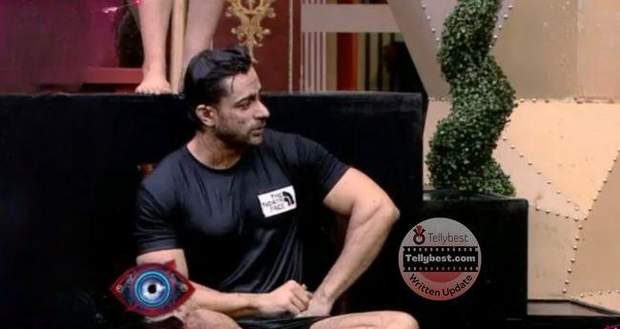 He further tells the viewers that there is a task going on inside the BB House which gives the housemates a chance to reveal who they the person whose Paap Ka Ghada (pot of sins) has filled up.

Inside the house, Most of the housemates take Archana Gautam's name for her rude attitude and habit of dragging the family members and loved ones into arguments.

She sits under the Ghada while the housemates throw dark water at her through the Ghada.

Shiv Thakare comes next and tells Archana to get off the bench while calling Shalin Bhanot to sit on the bench.

Shiv argues that Shalin's friendships are not genuine and reveals that he has talked about his "friends" behind his back.

Shalin argues that he is cordial with everyone while Sajid Khan reveals that Shiv is right.

Afterward, Sumbul Touqeer calls on both Shalin and Tina while Soundarya Sharma throws blackened water on Shalin for being rude and having double standards.

Soundarya also reveals that Shalin used to talk shit about Tina which she cannot even recite as a woman.

Archana takes back her REVENGE

Archana calls on Vikkas Manaktala next and tells him that he is dumb to believe the false lies there were told outside.

She also calls on Tina Datta and Shalin Bhanot.

Priyanka leaves saying that she won't tolerate this while Bigg Boss tells her and others that they cannot leave the garden until further instructions.

As the task ends, Sajid sits with Nimrit, MC Stan, and others while revealing that he did not like this task.

He says that he did not like the whole concept of throwing dirty water on someone.

Elsewhere, Soundarya reveals to Tina the things that Shalin had said about her.

Tina gets angry when Sajid comes there trying to comfort Tina.

However, Tina tells him to not interfere as he is the one who taunts her for not taking action against him after returning.

Tina and Shalin argue while she leaves telling him to never talk to her again.

Shalin also tells her to get away.

Meanwhile, Archana argues with Priyanka Chhar Choudhary for taking too much time in the bathroom.

On the set, Salman jokes that the task was about pots of sin but secrets have been revealed.

Salman greets the housemates and tells them that the task was amazing for the audience to watch.

He further tells Sajid and MC Stan to act out how Mr. Touqeer and his doppelganger would behave if they learn aboit Sumbul's actions in the past days.

Afterward, Salman talks about the criticism that BB as a show gets on social media with the accusation of being biased over certain contestants.

Salman tells all the housemates except Archana to go to their rooms.

Further, Salman tells Archana that her actions have degraded her as a person.

Salman tells her that if someone tells her something, she should talk back to them instead of talking about their wives, sister, or mothers.

Archana argues that they are the ones who start while Salman tells her that it is not a competition about who is more worse.

Shalin talks back to Salman

Afterward, Salman calls back all the contestants and scolds Vikas for trying to eavesdrop.

Salman talks about Archana's equation with the kitchen and tells Nimrit to retell the incident about Abdu Rozik's food being eaten by someone else.

Nimrit reveals that Vikas accidentally ate Abdu's mild curry and she had to give Abdu the curry which was made in the afternoon.

Salman turns to the topic of Shalin and Archana's argument.

He tells a word-to-word conversation between Shalin and Archana and asks Shalin why he was angry.

Shalin argues that he was angry cause Archana talked about someone who is very close to him and he cannot bear it.

Shiv explains the situation to Shalin

Salman asks her if he was angry because of the noise and Shalin agrees.

Salman further asks Shalin why he called Archana 'Do Kaudi Ki Aurat' when not only her but Priyanka, Shiv, and others were also involved.

Shalin misses the whole point and mocks Salman by saying that he will just sit and listen.

Salman asks if anyone understood what he was trying to say while Priyanka raises her hand.

However, Salman tells Shiv to explain and shuts Priyanka.

Shiv explains that Shalin exploded only after Priyanka came to support him while Priyanka refuses to acknowledge it.

Salman goes to tell Sajid to explain his observation and Sajid says that Shalin, Tina, Priyanka, and Vikas are pissed off at Archana for quite some time and that the kitchen incident was the topping point.

Vikas talks about Archana cursing his family while Salman asks him if he is right to go on the topic of Archana's education.

Salman asks Priyanka if talking about the educational qualification is right or not.

Priyanka says that it is wrong while Salman tells her that she is selectively righteous and does not speak up when it is about Archana.

Salman tells the housemates that he will be back while telling Shalin that his number has been blocked from his phone.

Later, Bigg Boss calls Archana and Vikas into the confession room to clear their misunderstandings and have them apologize to each other.