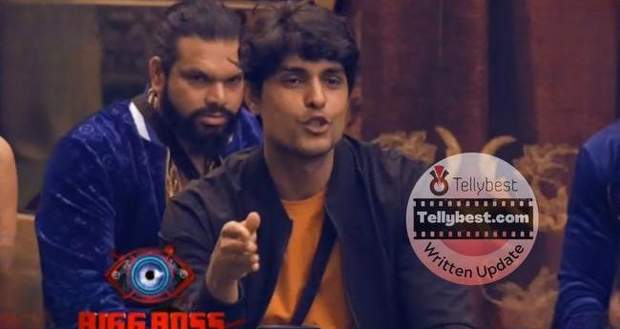 Today's Bigg Boss 16 30th November 2022 episode (day 61) starts with the contestants waking up to the sound of sirens as they wake up to the sirens and form a line in the garden area.

Shalin Bhanot tries to interact with the Golden boys Sunny and Bunty.

Further, Tina Datta sits with Archana Gautam, and Shalin while asking Sunny and Bunty about how they are looking to the outside viewers.

Meanwhile, Shalin gets irritated by Tina's over-ignorant attitude and leaves from there.

He goes to Soundarya Sharma who vents to him telling him how she feels dragged by Archana and is planning to break out of her spell.

Shalin tells her that she is more powerful than Archana and should come out of her spell.

Meanwhile, Shalin turns the conversation into flirting while Soundarya leaves from there.

Later, Sunny talks to Soundarya about how she fights with Archana and Gautam going viral and being shown a lot.

Archana jogs with Bunty and goes her workout while Shiv Thakare and others make fun of her.

Afterward, Tina talks to Sajid Khan about her situationship with Shalin and he tells her that he is sure Shalin likes her.

Further, Sajid goes to Shalin and tells him about his discussion with Tina while Shalin reveals that he likes Tina but does not want to look desperate for her.

Bigg Boss is upset with housemates!

Later, Bigg Boss holds a meeting in the living room and scolds the housemates for asking for outside information from Sunny and Bunty.

Bigg Boss also tells Sunny and Bunty that he is disappointed in them for talking about the outside world.

Afterward, Shalin sits with Tina and asks her if she likes him while she looks away from him and tells him that she of course likes him.

Shalin tells her that he likes her too and hugs her while telling her that he is not going to break her heart.

Nimrit accused of being biased!

Further, Bigg Boss brings in another task and tells Nimrit Kaur Ahluwalia to rank people from 1 (best) to 11 (worst) on the bases of their visibility and contribution to the show.

Further, Nirmit keeps her friends in higher positions while Ankit Gupta and Priyanka Choudhary keep on getting agitated.

Shalin and Tina start accusing Nimrit of being biased and having no knowledge of how to go with the task in a wise way.

Nimrit keeps Tina in the 8th rank while Tina argues with Nimrit saying that she herself thinks she should be in Abdu Rozik's place.

Abdu tells Tina that she can take his place while Nimrit says that it is not how the task is supposed to be.

Lastly, Nimrit gives the 11th rank to Ankit while he tells everyone that they should be ashamed of themselves if he is 11th and still in week 9 with being in nomination only once.

Ankit gets astonished at how small his basket is compared to others and laughs while Priyanka tells him to not worry.

The ration gets empty by the eighth leaving Ankit (who is at 11th rank) with nothing to take.

Bigg Boss tells Nimrit, Sunny, and Bunty to take whatever they want while Archana hides the luxury ration that she has hidden in the bottom of the basket.

Afterward, Shalin goes to Nimrit and tells her that he does not like that she is making fun of him without even considering his feelings.

Further, Shalin sits with Ankit and talks about how biased Sajid's group is.

Meanwhile, Ankit patches up with Priyanka and they hug while Archana comes there and jokes with them saying that Ankit came to Priyanka cause he didn't get any ration.

Both Ankit and Priyanka laugh at the joke after which Priyanka goes to sit with Shalin and Tina with her face beaming with a smile.

Shalin jokes that he feels the same as her but cannot express it as they do.

Further, they both laugh while they start jumping up and down.

Tina shouts for Ankit saying that he does not want to miss this moment and he comes while Nimrit and Soundarya talk about the competitive spirit awakening in Ankit's body during today's task.

Lastly, Tina gets angry seeing the dirty dishes and calls out for Nimrit who does not reply to her.

Nimrit comes afterward and argues with her while Tina says that she will not clean the dishes from now on.