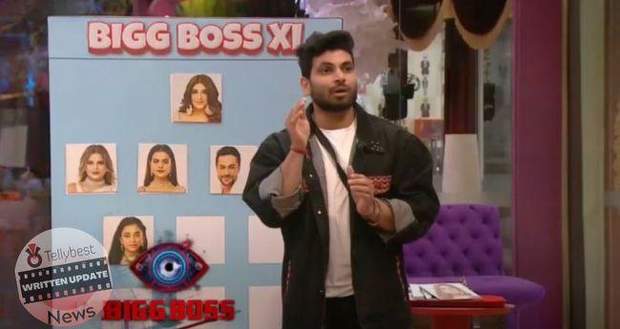 Today's Bigg Boss 16 30th October 2022 episode (day 30) starts with all the contestants waking up to the alarm and starting their lazy morning with the BB16 anthem.

Abdu craves his black tea while lying on the bed with Shiv Thakre who tells him that no one will get anything.

Everybody has their sad faces from last night's happenings since Gautam gave up all the ration to become the captain.

Meanwhile, Tina talks to Nimrit and others about how Sajid got violent last night when he was against it so much when Gori did the same with Archana.

On the other hand, Abdu goes and brings Dark Fantasy chocolates from his suitcase. He shares his chocolates with Gori, Stan, and Shiv.

Gautam asks Bigg Boss to grant the ration as some of the contestants have medical conditions.

Bigg Boss provides a ration for only one day and asks Gautam to manage it for the entire house.

Gautam informs Sajid about the food, however, the latter talks rudely and even swears at him.

Later, Soundarya and Gautam discuss the food while Gautam gives the two trays of eggs to Shalin who refuses to accept however Gautam asks him to take it.

Shalin accepts the tray but states that he will eat from it only after the entire house is fed there is no requirement for it.

Soundarya cooks an omelet for Sajid and requests him to eat it as he has medical reasons.

Sajid does take the plate but doesn't eat from it.

Meanwhile, Priyanka picks up the topic of Shalin accepting the eggs despite knowing the shortage of food.

Shalin and Priyanka start an argument over the food and the possession of the eggs given by Bigg Boss.

Priyanka blames Shalin for taking the eggs from Gautam and not distributing them equally among the others which resulted in them staying hungry.

Shalin gets angry with Priyanka and tells her that she is being arrogant toward him while Ankit supports Priyanka.

Shiv and Sajid decide they will not eat anything in the house until Gautam leaves his captaincy and gets nominated.

Bigg Boss calls Shalin and tells him that his reaction to Gautam’s captaincy was fake and he can do his acting auditions for his protein dose.

Everyone agrees that Shalin was acting fake which leads Bigg Boss to roast Shalin for his 150 grams of meat.

Shiv, Nimrit, Gori, MC Stan, and Sajid go on a hunger strike while Soundariya and Abdu try to persuade them to eat something.

Soundarya gives Nimrit her food, which she accepts, and others start eating, after which Priyanka helps Soundariya in the kitchen.

Gautam announces the duties to all the members with Archana and Tina making the breakfast, Priyanka and Nimrit with the lunch, and Shalin with the washroom duties.

Later, Bigg Boss calls Sajid and Nimrit a secret task of making everyone believe that they have received a punishment of separating rice and dal.

Sajid and Nimrit get to eat pizzas inside the confession room and distribute the same with the others doing the hunger strike.

Sajid and Nimrit tell everyone outside that they have to separate the rice and dal as a punishment if they want the next day’s schedule.

After that, Shiv and Gori go inside the confession room and eat pizza and continue to act like they are going through punishment.

Soundarya tells Gautam about her crashing if he refuses to eat and Gautam plants a soft kiss on her forehead.

Sajid and others also complement Soundarya’s commitment to Gautam but after a while, Gautam and Soundarya get a warning from Bigg Boss for using English.

Later, Bigg Boss asks everyone to gather and announces that the ones who were doing the hunger strike have completed it.

Further, Bigg Boss declares that the daily ration will be restored as usual and it is earned by the housemates on their own.

Everyone claps in unison and the people doing the hunger strike decide to eat food.

Sajid starts throwing up and makes everyone worry about his health.

The episode ends with Abdu singing a sweet song for the others in the middle of the night and bidding good night with his cutesy gestures.

© Copyright tellybest.com, 2022, 2023. All Rights Reserved. Unauthorized use and/or duplication of any material from tellybest.com without written permission is strictly prohibited.
Cached Saved on: Monday 21st of November 2022 12:43:30 AMCached Disp on: Tuesday 29th of November 2022 08:57:21 AM