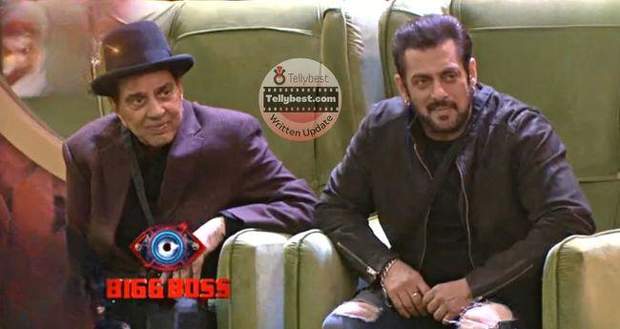 Salman asks Nimrit Kaur Ahluwalia why she is feeling upset that Abdu Rozik is not talking to her.

Nimrit reveals that she is upset about Abdu becoming rude to her after coming back and not being as friendly as before.

Salman tells her that Mandali was the one who was telling Abdu that he should maintain distance from her including herself.

Salman also reveals that Nimrit's mother contacted Abdu's team and talked to him before he reentered the BB House.

Nimrit gets shocked when Salman says that he will not get into it and the screen goes blank.

Nimrit asks Abdu what her mother told him and he says that he does not know if it is allowed or not.

On the other hand, Archana Gautam taunts Priyanka Chhar Choudary saying that she gets scolded by Bigg Boss every day.

Priyanka starts crying and says that she would prefer to leave than stay in the BB House with her while Tina Datta tries to calm her.

At the same time, Archana informs the Mandali about it who all get surprised while Sajid Khan says that the drama is happening because Archana became today's hero.

All the housemates agree while they hear music and rush to the glass doors towards the garden.

Dharmendra in the BB House!

As the curtains unveil, Legendary Actor Dharmendra is seen which shocks and excites the housemates as they rush to get his blessings.

Bigg Boss welcomes Dharmendra while Dharmendra talks to each contestant individually and makes them feel included in the conversation.

Afterward, Bigg Boss tells Sajid Khan to sit beside Dharmendra and do his magic of storytelling.

Sajid sits beside Dharmendra and talks about Dharmendra's accomplishments when Salman Khan enters the BB House to entertain and celebrate with the housemates.

Salman and Dharmendra sit together and tell the housemates to perform as they will find out who is Bigg Boss House's Dreamgirl.

All the girls dance while the gents of the house recite famous dialogues from Dharmendra's films.

Salman talks about the importance of family and tells the housemates to state who has become their family inside the house.

The whole Mandali chooses Sajid while Soundarya Sharma and Archana select each other as their family.

Priyanka chooses Abdu and tells him that he has always treated her like a contestant.

Salman jokes that they all know whom she wanted to give it to indicating Ankit Gupta.

Further, Salman Khan and Dharmendra bid the housemates goodbye and go back to the sets.

At the set, Dharmendra sits in the yellow couch chair while comedian Krishna comes there dressed as one of the characters of Dharmendra's film.

He humors the viewers and the audience with his comedy while another comedian comes there.

Krishna talks about his film with Dharmendra and jokes about how he could not wonder which fire to put out, the one in his body or the one in the train.

Afterward, Krushna shows a picture of Dharmendra drinking wine on camera for the first time and jokes that the third hand is his.

He further pulls out badminton and starts playing with Salman while the famous song of Dharmendra 'Dhal Gaya Din' plays in the background.

They all joke around and laugh after which Krishna, Salman, and Dharmendra dance together.

Krushna further takes his leave after taking blessings from Dharmendra.

Salman greets the housemates once again and tells them to state which will have 'no sale' as they have no contribution.

Meanwhile, Sumbul Touqeer comes there and takes Sreejita De's name which she does not like.

Tina selects Shalin which shocks everyone when she says that she has been learning the truth.

In the end, Sreejita, Shalin, and Vikas are the most voted while Salman says that he will also reveal the truth now.

The atmosphere gets tense as Salman reveals that Vikas is the one eliminated from the task.

The housemates bid Vikkas goodbye as Archana and Abdu say that they are happy there is one contestant less to fight with.

Meanwhile, on the set, Krushna Abhishek again arrives in another costume.

Krushna's wife, Kashmeera also comes there and lights up the drama with her humor.

Krushna and Kashmeera greet the housemates after which Kashmeera bids them goodbye.

Krishna jokes with the housemates and says that he met Ankit outside and he talked for 3 hours straight.

Further, Krishna bids them goodbye after wishing them a happy new year.

Meanwhile, Karan Kundra greets Salman Khan and teases him about not getting the trophy but getting the winner.

Afterward, Karan goes inside the house while Salman bids the housemates goodbye.

On the other hand, MC Stan has made a resolution to give a good speech when getting the trophy.

Afterward, Jannat Zubair comes there and also greets the housemates.

She dances and makes all the housemates wear HIT necklaces.

They do a reel with all the housemates and tell Archana to blindfold herself as they have a surprise.

Rajiv Adatia comes there and back hugs Archana while she gets shocked and escapes from him.

Further, she helps him prepare a speech in Hindi while he helps her recite a compliment in English.

Afterward, the contestants act out humorous situations and laugh towards the ending hours of the year 2022.

Karan and Jannat host the Buzzer Awards next and give unique awards like "most likes to be a vamp" (won by Priyanka) and "crying shoulder" (won by Shiv Thakare) awards.

Meanwhile, Abdu wins the "hugger of the house" award.

In the next task, the housemates take the name of the contestants they hate and throw their pictures in the barrel which will blast fire.

The guests take their leave afterward while the housemates celebrate the new year.

© Copyright tellybest.com, 2022, 2023. All Rights Reserved. Unauthorized use and/or duplication of any material from tellybest.com without written permission is strictly prohibited.
Cached Saved on: Wednesday 25th of January 2023 09:23:04 AMCached Disp on: Wednesday 1st of February 2023 10:02:57 PM