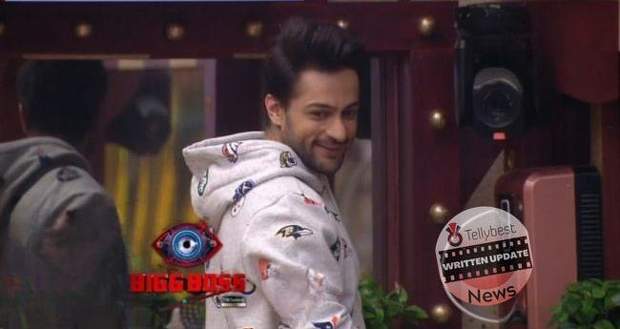 Today's Bigg Boss 16 31st October 2022 episode (day 31) starts with all the contestants waking up and singing the Bigg Boss anthem.

Abdu Rozik's wife cheats on him?

Further, Sajid Khan laughs with Abdu Rozik as he keeps asking him what he would do if he found his wife cheating on him.

Meanwhile, Archana Gautam is trying to warm Soundarya Sharma by telling her to keep her distance from Gautam Vig as he is an unpredictable man.

At the same time, Gori Nagori and MC Stan discuss how Gautam is having no repercussions since BB gave the food to everyone.

Shiv Thakare and Abdu Rozik are having fun as Abdu flirts with all the female contestants and gives them his fake number.

Nimrit Kaur Ahluwalia tells Abdu that she will not get jealous as she knows that he likes only her.

On the other hand, Archana refuses to make lunch while Abdu, Nimrit, Shiv, and Sumbul Touqueer sit together and discuss.

Abdu accidentally says a bad word due to his pronunciation and Nimrit corrects him while telling him to not say the other word again.

Elsewhere, Shalin Bhanot tries to talk to Tina Datta but she refuses to say that he can talk to Sumbul.

Abdu ignores Sumbul while Nimrit and others try to make them talk out their arguments.

Soundarya makes the lunch in the end and brings a plate to Archana which isn't liked by Gautam.

Shiv talks with Tina and gives her advice as he reveals that he thinks Shalin is just trying to play the love angle with her.

Shekhar Suman arrives in the BB House once again with the Big Bulletin.

He compares the Bigg Boss show to cricket and does commentary on the gameplay of all the participants.

Shalin further mocks Soundarya and Nimrit for speaking in English and talking with a British accent.

Ankit Gupta gets a Talktime of 50 Rs.

Shekhar further asks Shiv to give cricket positions to the housemates and gives unique descriptions.

Nimrit becomes the captain while Priyanka gets the title of the umpire.

Shiv says that Gautam is the most double-crossing contestant.

During the discussion, Priyanka reveals that she thinks after, Shiv is the most competent to win the show.

Archana tries to get attention by arguing with Priyanka regarding food.

Shiv declares Gautam as the googly-throwing contestant and points out how he hid behind the excuse that he wanted to prove his relationship with Soundarya instead of playing on the front foot and saying that he wants to play with the captaincy privileges.

Lastly, Shiv titles himself as the most passionate contestant.

Shekhar takes his leave while Priyanka and Archana again argue and Priyanka tells Gautam that she won't make any food.

When Archana tries to make food, Gautam stops her and makes her leave while she insults him once again.

Elsewhere, Shalin and Tina are discussing something Shalin starts arguing with her and brings Gautam, Sumbul, and Nimrit into the argument.

Later, Shalin tries to take revenge on Gautam by mocking him and Soundarya by acting like him, and Nimrit acting like Soundarya.

At the same time, Soundarya makes dinner while venting to Gori about her relationship problems with Gautam.

Archana goes into the kitchen and makes food as if she owns it and argues with all the housemates.

During the nighttime, Abdu has fun jumping from one bed to another while Shiv starts a pillow fight with him and the other contestants.

On the other hand, Gautam and MC Stan discuss the dilemma of being in a friend group and how they are not allowed to certain contestants.

© Copyright tellybest.com, 2022, 2023. All Rights Reserved. Unauthorized use and/or duplication of any material from tellybest.com without written permission is strictly prohibited.
Cached Saved on: Monday 21st of November 2022 02:55:07 AMCached Disp on: Friday 9th of December 2022 05:03:24 AM