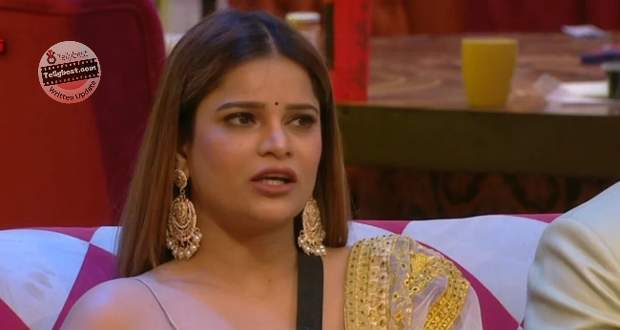 Today's Bigg Boss 16 3rd December 2022 episode (day 64) starts with Salman Khan greeting the audience and telling them that the fans are the ones who get overcharged after seeing the episodes.

Further, Salman brings the hardcore fans of Bigg Boss and asks them who their favorite contestant is from the current story.

The fans introduce themselves while telling who their favorite contestants are.

Afterward, Salman tells them to express their opinions on Archana Gautam and most of the fans say that she is irritating due to not being able to express her right topic in front of the housemates and the viewers.

Who is better? Priyanka or Archana?

Salman further asks them about Priyanka Choudhary being a competitor against Archana while most of the fans say that they do not like the way she is approaching things now.

Afterward, Salman introduces the housemates to the hardcore fans and tells them that they are going to get questioned.

Fan Subham asks Tina Datta why she expects selfless support from other housemates when she herself keeps friendships for benefits only and had said herself that she was going to leave them.

Tina says that she is a contestant in the Bigg Boss House and will definitely play games and make deals for her benefit.

Afterward, Akansha asks Archana why she made fun of Soundarya Sharma for her rings when she supported her throughout the show as a friend.

Archana reasons that she had not meant to make friends at the start but then later formed a friendship with Priyanka and Soundarya.

Further, Sonu asks Soundarya why she doesn't play from the front foot since she is a strong contestant while Soundarya replies that she knows that now and is going to play for herself.

Akansha asks Shalin why he is always running after Tina when she never stands up for him.

This causes some drama as Shalin says that he is not entitled to tell anything to anyone and states that he respects Tina.

Afterward, another contestant asks Tina to clarify whether she and Shalin are in a relationship or not since she is jealous every time Shalin talks to other female contestants.

Further, the fan also tells Tina that Shalin is not Shah Rukh Khan and that everyone likes him.

Salman bids them goodbye while inside the house Shalin tries to Tina but she tells him that they do not have any relationship with each other and leaves.

Shalin further goes to Sajid Khan and talks to him about it while Sajid questions why they are hiding their relationship instead of confessing it to everyone.

Salman greets the contestants once again with a plate in his hands while a crew member comes there and takes the roti from the plate.

The housemates laugh realizing what is happening while Salman addresses the argument that had happened between Soundarya, Archana, and Nimrit regarding the roti incident.

All three girls start blaming each other while Salman says that Soundarya should have let Archana make her own rotis that she was going to do.

Afterward, Salman asks Archana if her family sees the show and questions her about what she thinks of herself that she comments on the Sumbul's face and her profession while also calling Shalin a dog consistently.

Shalin gets roasted by Salman Khan!

Archana argues that Shalin also called her many things while Salman tells her that she is thinking too highly of herself as she even talked back to Bigg Boss.

Shalin tries to talk even after Salman interrupts him which angers Salman as he tells Shalin to shut up.

Further, Salman says that there are many other contestants who have started going against Bigg Boss and reveals that many contestants are speaking in English even after being warned time again and again.

Salman further makes Tina and Priyanka stand in front of the shart-shaped box while telling the housemates to choose whose heart think is darker/black and pour black-colored water into the box.

Most of the contestants choose Tina and reason that she is not loyal to their friends and bitches about them to other people.

Afterward, Salman greets Kaisi Yeh Yaariyaan 4 cast Parth and Niti Taylor who reveal that they are die-hard fans of the show.

Further, the guests greet the contestants and make them do a task where they have to decide who will bring whom done between Shiv and Sajid into their friendship.

The guests leave while Salman says that it is time for elimination and asks the housemates whom they would like to kick out by sticking their face sticker to a ball and kicking it out the front door.

Most of the contestants choose Shalin and Sumbul Touqueer while there are some stray votes for Sajid.

Salman says that there will be no eliminations today and bids the housemate's goodbye.

Afterward, inside the house, Archana cries as she tells Bigg Boss that she will not meddle in anyone's business again and will not even tell Bigg Boss if anyone is sleeping.

On the other hand, Shalin sits with Tina and asks her if she has feelings for him while she says that she cannot do it in front of the cameras and leaves from there.

Further, Shalin lies in his bed and talks to Priyanka about his situation with Tina while she tells him to cheer up.

© Copyright tellybest.com, 2022, 2023. All Rights Reserved. Unauthorized use and/or duplication of any material from tellybest.com without written permission is strictly prohibited.
Cached Saved on: Wednesday 25th of January 2023 11:50:20 AMCached Disp on: Tuesday 7th of February 2023 01:24:48 AM