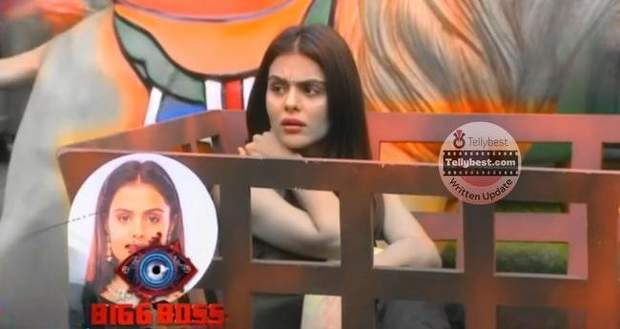 Today's Bigg Boss 16 3rd January 2023 episode (day 95) starts with all the housemates waking up to the sound of sirens as they rush to the garden to sing BB Anthem.

Afterward, Shalin Bhanot comes to Tina Datta's room and flirts with her.

Meanwhile, Archana Datta is in the kitchen making her food while the duty is of Tina.

Tina comes there and asks Archana if the kitchen is empty while Archana says the kitchen has been empty for a long time and she has also cleaned it.

Archana argues with Tina and taunts her saying that she does not come to the kitchen to make breakfast since she does not get free from her romance with Shalin.

Tina talks back and tells Archana that she and Shalin are friends and questions her relationship with Soundarya.

Later, Soundarya and Archana tell this to Nimrit Kaur Ahluwalia who says that Shalin is disgusting.

On the other hand, Shalin and Tina mock Archana saying that she herself is cheap and questioning their relationship.

Afterward, Priyanka Chahar Choudhary argues with Shiv & Nimrit due to her food not being made and demands that the contestants ask her what she wants to eat everytime.

Bigg Boss tells the housemates that the participants who are safe will get the chance at captaincy and will have to sit in the basket in the garden area.

Further, the remaining contestants will have to catch the ball from one of the three slides.

Most of the balls get invalid due to touching the ground while Soundarya becomes the first one to get the ball and she adds it to Abdu Rozik's basket.

Bigg Boss mocks about Tina whispering into Shalin's ears while all the other housemate's laugh at her.

Meanwhile, Shalin manages to get two balls and he puts them in Priyanka's while Soundarya, Shiv Thakare, and Sumbul Touqeer Khan put the balls they caught into Abdu's basket.

Sajid Khan tells Priyanka to get out of the basket or else he will disqualify her while Priyanka argues that he was the one who told Abdu to sit in the basket.

Priyanka accuses Sajid of being biased and Sajid gets angry and says that he can say anything since he is the coordinator.

In the end, Abdu Rozik gets the most ball and wins the task with Priyanka having only one less ball.

Tina, Priyanka, and Shalin get upset with Sajid's coordination and taunt him while he just replies that they should know he is a very biased coordinator.

Afterward, Archana argues with MC Stan for not cleaning the bathroom and doing his duty while Sreejita De and Shiv start arguing with Archana and defend MC Stan.

Archana keeps on arguing with MC Stan and drags Shiv and Abdu into it while she insults MC Stan and his friends.

MC Stan brings the family into the argument which angers Archana and the argument keeps on becoming cheaper and cheaper.

Archana recites one of his lyrics and swears at him while Sajid takes him to the bathroom area and calms him.

On the other hand, Archana continues the argument with Shiv by saying that she will not cook until the bathroom is cleaned.

Stan again comes out and argues with Archana while she tells him to remember that they both have parents.

Sajid tries to calm Archana but she says that she will not stay quiet as she always gets taunted when her duty is not done.

Afterward, Sajid tries to calm Archana while she tells him to sit and says that she is not wrong.

On the other hand, Nimrit questions Shiv and Stan about why Archana argued when Abdu became the captain and not when Shiv was the captain.

Later, Archana cries to Soundarya saying that she did not want to curse but that it happened in the spur of the moment.

Elsewhere, Tina sits with Sajid and tells him that she does not understand where she went wrong for him to treat her wrongly.