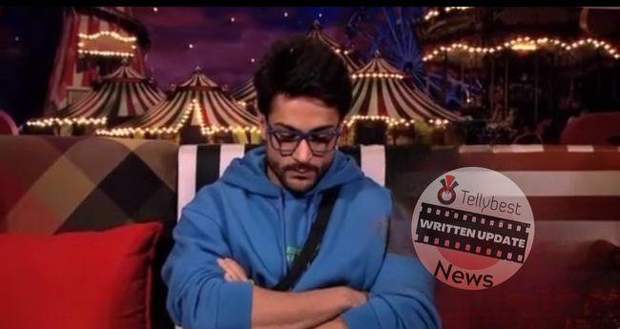 Bigg Boss calls Shalin into the confession room for a discussion while the rest of the contestants sit in the living hall.

Shalin gets Roasted by Bigg Boss

Inside the confession room, Bigg Boss 16 tells Shalin that the ration is not given randomly inside the house and that it is suggested by a dietitian.

Shalin argues that he needs his chicken intake while Bigg Boss shuts him up by saying that the intake is sufficient and that he will not be getting any more chicken.

Shalin leaves the confession room in passive aggression while Tina Datta tries to calm him by saying that he should talk to MC Stan and tell him that the chicken is sent for him only.

Further, Archana Gautam starts rebuking Shalin for playing such a petty game regarding food while Shalin, Sajid Khan, and Sumbul Touqueer talk among themselves inside the bathroom.

Bigg Boss tells them to talk in front of everyone and scolds them while Sajid gives chicken from his room to Shalin.

The next day starts with all the contestants waking up and singing the BB Anthem to awaken their minds.

While making tea and coffee, Archana spills milk and tells MC Stan to clean it.

However, he refuses to do it saying that he didn't do the mess while Archana reminds him that kitchen cleaning is his duty.

Shiv Thakare stands up for his friend and tells Archana to make sure that she cleans the kitchen after her duty or else she will also get punished.

Afterward, Archana sits with Gautam Vig and talks very degradingly about Soundarya Sharma while Gautam just listens and doesn't stand up for his supposed love interest.

On the other hand, Bigg Boss calls Tina Datta into the confession room and tells her to come out of the house as something personal has happened.

Later, Archana is late in making the lunch and states to Shiv that it will be made as per convenience as she is the only one making lunch.

Abdu Rozik sits with Archana as she is preparing lunch and asks her about Shalin as they are roommates.

Tina returns and cries to Shalin and Nimrit Kaur Ahluwalia while informing them that she has lost her pet.

Shiv and Gautam help Archana with cooking while Archana starts bossing them around which is not appreciated by Gautam.

Priyanka Choudhary starts mocking and teasing Archana by asking her if she's tired of making lunch when she used to claim that she can easily cook for 50 people.

Suddenly, Bigg Boss calls all the contestants into the garden but no one listens except for Abdu and Sajid.

A new Captain for BB House!

The past captains Nimrit, Shiv, Archana, and Gautam will act as pied pipers (anyone per round) and the remaining contestants will act as the rat from which the pied piper will throw one into the well indicating that the said housemate is out of the task.

Shalin's shallow idea to get the captaincy

Shalin tells Tina that she should use the sympathy card and gain the confidence of the ex-captains by telling them that she has lost her pet.

However, Tina tells Shalin firmly that she will not even think of executing such an idea.

Further, Tina sits with Gautam and tries to convince him to save her while Nimrit and Shiv are giving Abdu tips on how to win over Archana and Gautam.

A big FACE-OFF between Shalin and Gautam

Shalin comes to talk to Gautam who states that he does not want to talk to him.

Being blinded by his anger, Shalin starts cursing at Gautam, and the fight intensified into a huge drama.

Archana enjoys the argument while the housemates get tired of trying to stop the two stubborn and hot-headed contestants from fighting again.

Just then, the sound of piping bags is heard which indicates the start of the task.

In the end, Gautam selects Tina and Sajid to remove them from the captaincy race.

The second round starts and the Pied Piper Nimrit removes Priyanka and Soundarya Sharma from the captaincy race.

Bigg Boss announces that the next Pied Piper will be Archana as Ankit Gupta and Sumbul latch onto her arms.

Captaincy between Abdu and Sumbul?

However, Archana makes a promise from Shiv of Abdu to become the new captain and removes Ankit and Gori Nagori from the captaincy race.

© Copyright tellybest.com, 2022, 2023. All Rights Reserved. Unauthorized use and/or duplication of any material from tellybest.com without written permission is strictly prohibited.
Cached Saved on: Monday 21st of November 2022 06:13:16 AMCached Disp on: Friday 9th of December 2022 03:40:37 AM