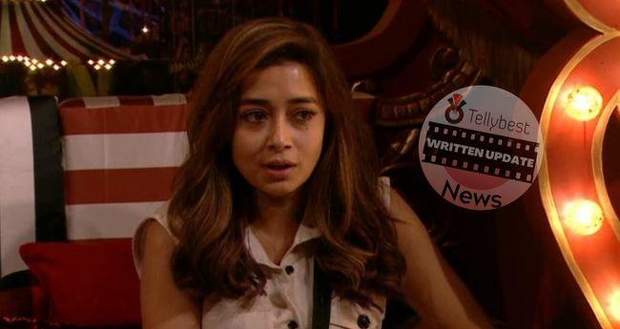 Today's Bigg Boss 16 3rd October 2022 episode 3 (Day 2) starts with the contestants waking up to a siren and going to the garden and standing in the line.

Shiv asks Abdu about his type of girl and makes Abdu shy while Abdu says he wants a simple and normal girl.

Later, Abdu wants Hasbulla come to Bigg Boss House who is the same height as him and is a professional boxer.

In the afternoon, Tina proposes to Abdu and makes him blush while Shiv is his constant companion.

During the day, Siva does not listen to Nimrit as he says that she is shouting and the argument is on who will wash the dishes.

Bigg Boss is in no mood to listen to any sugar-coated words and gives the contestants a task to burn the images of two contestants from the fire to eliminate them.

However, no one can burn Nimrit's image as she is the captain.

Shalin clears why he nominated Sajid and tells Abdu that Bigg Boss 16 is not the place for him.

All the contestants gather in the living room and Bigg Boss takes the names of the nominated contestants which are Shiv Thakare, Gautam Vig, Mc Stan, Gori Nagori, Sajid Khan, and Archana Gautam.

However, Bigg Boss has a surprise for Tinna Bhatt, Soundarya Sharma, & Manya Singh and scolds all three of them for not following the rules and regulations of the house.

BB then instructs Tina, Soundarya, & Manya to clean the house all alone.

Outside, Archana picks up a broom and makes fun of Tinna who is in the kitchen and fed up with Archana pulling her leg.

Later, Ankit and Priyanka bitch about MC Stan, saying how can he become a finalist if he portrays himself to be too disinterested and not following the rules of the house.

Afterward, Shalin Bhanot is called into the confession room and Bigg Boss asks him to describe some contestants.

Shalin calls Manya edgy, Archana "loud", etc. but Bigg Boss asks Shalin if he has so many opinions, and why is he not showing it in the game.

Shalin is then forced to tell BB16 his reason for nominating Sajid Khan because as per Shalin, Sajid looks disinterested.

Bigg Boss calls Shalin a weak, "Kayar" as he cannot fulfill his dream of winning BB16 with such a weak, sugarcoated personality.

Gori Nagori is then called by Bigg Boss who scolds her for being too nice. She says she doesn't want to leave in one week and BB then asks her NOT to play nicely.

In the garden, Tinna asks Mc Stan to hand her some of his jewelry since it costs crores.

Priyanka Choudhary AKA Tejo then gets called into the confession room where Bigg Boss scolds her not to offer advice to everyone.

During the evening, MC Stan raps for everyone whereas Gori Nagori entertains the contestants with her hot belly dance to the song sung by Abdu.

Sumbul also raps a song written by her father which Shalin says should be listened to by everyone.

Ankit AKA Fateh can be seen hugging a crying Tejo who says Bigg Boss scolded her for being too nice but she cannot change her personality.

Tinna Dutta gets into an argument with Manya Singh

Later, Manya and Tina get into an argument where Tinna calls Manya "rude" and Shalin takes Tinna's side.

Manya ends up crying while Gautam complains of both of them fighting like kids.

Gautam tells Priyanka not to be "Jagat Maata"

Late in the night, Priyanka gives another piece of advice to Nimrit which is not liked by Gautam as he tells Priyanka not to become "Jagat Maata".

Ankit pulls Priyanka back while Gautam warns Priyanka to ever link his name to any girl unnecessarily.

However, both of them patch up in the night before sleeping where Gautam says he does not want to hold any grudges and Priyanka says she will support him.

© Copyright tellybest.com, 2022, 2023. All Rights Reserved. Unauthorized use and/or duplication of any material from tellybest.com without written permission is strictly prohibited.
Cached Saved on: Monday 21st of November 2022 08:26:33 PMCached Disp on: Wednesday 7th of December 2022 03:11:31 PM