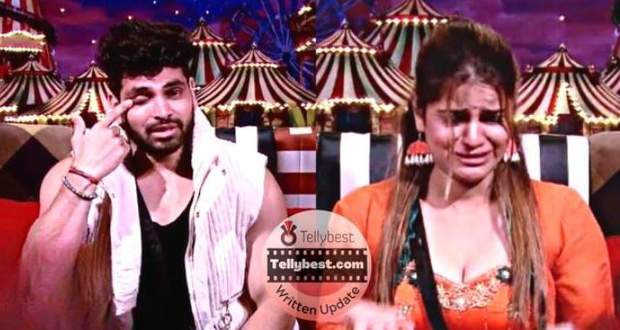 Today's Bigg Boss 16 4th December 2022 episode (day 65) starts with everyone waking up to the siren as they go to the garden and sing the BB Anthem.

Tina Datta talks to Priyanka Choudhary and tells her how she doesn't know what to do as she is looking negatively at whether she stays with Shalin Bhanot or not.

Meanwhile, Sajid Khan jokes with Abdu Rozik and tells him that he is going to become Dracula while Nimrit Kaur Ahluwalia comes there and sits with them.

Sajid asks Abdu if he should leave them alone and teases him which makes Abdu angry.

Afterward, Priyanka is complaining about her issues to Soundarya Sharma while Soundarya just acts like sleeping.

Nimrit sleeps on the floor while Abdu comes and lies beside her while talking to her to cheer her us since she is looking tired and upset.

On the other hand, Sajid talks to Tina and tells her that she has been ignoring Shalin and acting like she doesn't even know him every time someone points out their relationship which hurts Shalin.

Further, Shalin sits with Tina and tries to convince her to accept that they like each other.

Priyanka laughs as she asks her why she's sad.

Archana says that she is feeling demotivated with life and wants to do something good.

Archana tells Priyanka that she wants to be so perfect that no one tells her anything.

Shiv Thakare steals Nimrit's items and runs around the house while Nimrit, Abdu, and Sumbul Touqeer run after him.

Shiv accidentally hits Abdu in the mouth and he acts angry.

Away from them, Ankit Gupta asks Priyanka why she is upset.

She reveals to him that she is feeling like she is being portrayed as the villain after him telling her that she focuses only on the game.

Ankit tells her that it's not like that while Priyanka tries to hide her tears and says that she's happy cause he was praised for his individual gameplay.

Ankit finally comforts Priyanka and asks her for a peck on the cheek while she jokingly asks him if he remembers they are friends.

Meanwhile, Abdu jokes to Ankit and Shiv that Soundarya told him his teeth will fall out soon.

At night, Soundarya tells Archana that she hurt her feeling and expects an apology but Archana says that she will not apologize as she doesn't feel she did anything wrong.

The next morning, Sajid and the whole group are making fun of Abdu while he tells everyone 'Chal Hatt' except for Nimrit.

At the same time, Priyanka sits with Ankit and tells him that she realizes she might not be able to get work outside afterward.

She cries as she says that she has to get her brother married and also has to take care of the family.

Meanwhile, Archana complains to Nimrit that the bathrooms are not cleaned while Tina cleans them saying that she will do it for her.

However, Archana taunts that Tina was born with a silver spoon while Shalin comes there and starts arguing with Archana.

Priyanka sits with Sajid and tells him that she is concerned and likes Ankit in a motherly way and calls him her baby.

Sajid argues that Priyanka and Ankit are habituated to each other's presence.

Meanwhile, Abdu is helping Nimrit while Sajid comes there and again teases Abdu.

Tina and Shalin see Ankit and praise him while Ankit does a pose for her.

Tina acts like a fangirl while Shalin tells Ankit that he will meet him afterward.

Ankit leaves while Tina laughs and asks a jealous Shalin if he was angry.

Further, Shalin talks to Sumbul regarding food and also in an attempt to make Tina jealous but she just laughs as she knows his move.

Sajid sits with his friends and tells them that he thinks Shalin and Tina are acting only to gain the captaincy.

Later, the housemates sit in the living room as Shekhar Suman comes in acting like MC Stan which makes everyone laugh.

Shekhar further makes fun of the housemates and roasts them in a rap.

Shekhar calls the housemates 'Shemdi' which makes everyone laugh as it is a word that MC Stan uses a lot.

He even makes fun of Soundarya's ring by saying that the housemates are more focused on her ring than the actual prize money.

Tina gets made fun of for wanting to be a queen as she already has a servant in the name of Shalin.

Stalin gets roasted saying that he has been friend-zoned, bro-zoned, and even dad-zoned.

Shekhar further does a rap about Bigg Boss contestants and their complexities which makes everyone laugh except for Tina.

Further, Shekhar takes his leave while Tina acts annoyed by all the comments made to her.

She goes back to cleaning the dishes while the rest of the housemates also start their duties.

Tina says that she can't clean the cooker and leaves while Priyanka and Nimrit clean it annoyed that Tina can't do even a little thing.

On the other hand, Sajid talks to Sumbul and tells her that he saw her talk to Shalin in the morning and tells her to be careful and remember what her father told her.

Later, Bigg Boss tells the housemates that he saw the contestants inside the house for the past twenty-four hours and realized that they miss their parents.

Bigg Boss tells the contestants that today they will not be scolded or reprimanded but that opens the doors to his confession room for a heartfelt conversation with none other than himself.

Priyanka goes inside first as Bigg Boss asks her what she is feeling.

Priyanka tells Bigg Boss that she feels like she has been astray from her game and does not even remember why she had entered the Bigg Boss house due to her current situation with Ankit.

Priyanka cries as she says that she is worried she won't get any other work outside and tells her father she didn't do anything to let her down.

Bigg Boss explains to Priyanka that it is not her job to stand up for Ankit as he has never said anything for her while telling her that she should make other friends apart from Ankit inside the house.

Priyanka cries saying that she knows what Bigg Boss is trying to tell her but cannot control her emotions.

Bigg Boss reminds her she has had three emotional breakdowns in three days because of a friendship where she is not valued.

Priyanka comes out and tries to hide her tears while Ankit notices it and asks her what is happening.

Meanwhile, Shiv goes inside the confession room and starts getting emotional as he says that he is being portrayed as a mastermind manipulator while he truly is playing the game to keep his friendships.

However, Bigg Boss tells him that it is true Shalin thinks with his heart and which is why he should not become a supporter of the house only.

Bigg Boss tells Shiv that he should play with his heart with the dream of winning the trophy.

Archana goes into the confession room next and Bigg Boss asks her why she cried while singing the song the previous day.

Archana starts crying as she states that only Bigg Boss feels familiar to her and like a family.

Bigg Boss asks Archana if she made the spice for the chicken and she says that she made a really good masala.

Bigg Boss tells her that just like that, she has to keep everything in balance.

Further, Bigg Boss calls Tina and Shalin inside together and gives them a newspaper clipping against each other.

They both get upset when Bigg Boss tells them that it was just an activity to tell them to not care about the outside world too much.

MC Stan and Abdu are called inside afterward while Bigg Boss makes Stan hear one of his songs to motivate him to stay inside the house and play their games.

At night, MC Stan and Sajid help Abdu steal chocolates while Shalin and Tina are again seen hugging each other.

However, Sajid and Stan forget to keep the things back in place and Nimrit figures out that someone stole chocolates from the box.

© Copyright tellybest.com, 2022, 2023. All Rights Reserved. Unauthorized use and/or duplication of any material from tellybest.com without written permission is strictly prohibited.
Cached Saved on: Wednesday 25th of January 2023 04:50:46 PMCached Disp on: Monday 6th of February 2023 06:09:51 AM