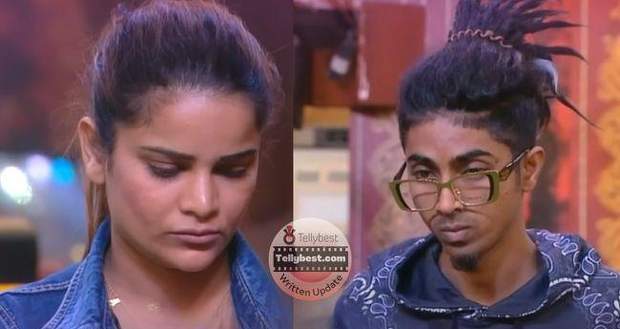 Sajid Khan criticizes him for deciding to quit for a girl and asks if Archana Gautam values 2 crore rupees for him.

Sajid instigates Stan for slapping Archana and gets thrown out of the show which he takes seriously and stands up to go and slap her.

The Mandali stops him with great difficulty and later feeds him against his will.

On the other hand, Archana cries to Soundarya about how Stan insulted her mother.

At 6 in the morning, Archana tells Soundarya that her mother chose her over her father.

Archana feels tired of fighting and worries about her image.

Furthermore, the siren goes off and everyone gathers in the garden area to sing the BB anthem.

Soundarya tries cheering up Archana while Shiv cheers up Stan.

Soundarya sits with Sajid and Nimrit and tells them about Archana's condition while Sajid tells her about Stan's condition.

Meanwhile, Abdu Rozik and Shiv Thakare have fun together as they flirt with each other and depict a scene of a long drive date with Abdu sitting in the backseat.

Afterward, Abdu goes to check up on Stan. Later on, Tina Datta complains to Abdu about Sumbul not doing her duty which has doubled her work.

Abdu goes to Sumbul Touqeer Khan, asking her the reason.

Sumbul tells him that she is having shoulder pain and Sajid directs Abdu to tell Tina that Sumbul is not well.

Further, Sreejita De also requests Abdu to change her duty as she has a knee injury that will take time to heal.

Meanwhile, Shalin Bhanot is telling Priyanka Chahar Choudhary to take chicken during the ration task for him as he also gave her balls during the captaincy task.

Priyanka gets offended and asks Shalin to never do anything for her if he is gonna come and show off his favors.

Priyanka adds that if he considers her friend then ask with full right.

Shalin flirts with Maahim and asks her if she would like to be his girlfriend which Maahim rejects by going away from him.

Later, Bigg Boss calls everyone to the living area for the ration task.

Bigg Boss announces that the garden area has turned into a fair where the contestants can go and have fun.

Housemates get scolded by Bigg Boss

However, the housemates do not play enthusiastically but only Priyanka manages to get a basket of ration.

Bigg Boss asks the housemates if they want to keep playing this way while they tease Tina Datta and Shalin Bhanot for planning and still failing.

Further, Bigg Boss announces the game for stall 3 which is to spin the bottle.

Abdu becomes the coordinator and he selects MC Stan as the winner while Archana Gautam gets angry.

Stan chooses room no.1 and gets three cold drinks.

Further, in the fourth round, Sumbul Touqeer Khan wins and chooses room 3.

Afterward, Bigg Boss announces that it is the end of the task which shocks the contestants.

Bigg Boss tells them that this was the most boring fair ever and that if they want to show their weak personalities to the viewers, he will show just that.

Priyanka Chahar Choudhary gets angry at Archana and MC Stan for not participating in the task.

Later, Priyanka argues with Abdu and states that she does not want to give the ration to everyone.

Further, Sajid is helping Abdu distribute the ration while Priyanka and others comment to him.

At the same time, Archana keeps on sulking as she tells the cameras that she is a human and she gets hurt too.

She gets emotional and cries while she tells Bigg Boss that she is there for only him.

Later, Tina and Priyanka argue with Shalin Bhanot for trying to look good and making them bad in front of Sajid and others.

However, Shalin picks another topic and tells them that he does not need to look good in front of either them or the media.

MC Stan tells Sajid that he wants to give his ration to the common but Sajid stops him.

Tina shows the chocolates that she stole from the props of the task while Bigg Boss scolds her and tells her to return them.

Further, the housemates are having lunch while Shalin loudly asks Tina why she hit his leg.

She gets embarrassed and looks down at her plate of food while most of the housemates leave feeling the awkward atmosphere.

Priyanka tells Shalin that he should not have spoken about such a matter in front of everyone while he says that she does not want to get scolded by anyone.

At night, Tina talks to Shalin about his mistakes while he manipulates her with his sugarcoated words and tells her that they should not about things being done in the past year in the new year.

© Copyright tellybest.com, 2022, 2023. All Rights Reserved. Unauthorized use and/or duplication of any material from tellybest.com without written permission is strictly prohibited.
Cached Saved on: Wednesday 25th of January 2023 11:56:53 PMCached Disp on: Sunday 5th of February 2023 02:58:20 AM