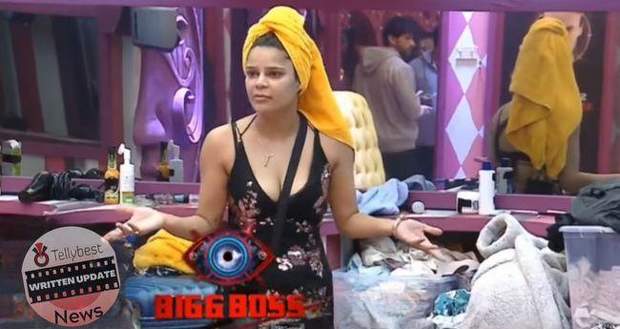 Abdu Rozik is the New Captain of BB 16!

Inside the house, Shiv Thakare takes MC Stan and Sumbul Touqueer with him to the pool making Abdu Rozik the new captain of the BB House.

All the housemates also dance with Abdu to celebrate his captaincy while Tina Datta tells him to make sure that he does not get influenced by Sajid Khan or anyone else.

Soundarya-Gautam argue with each other

Meanwhile, Gautam Vig and Soundarya Sharma keep arguing about a degrading discussion regarding Soundarya that Gautam had with his friends.

Gautam tells Soundarya that he is frustrated by having to give justifications over and over again in front of national television.

He tells her that they can continue their relationship once they are out of the house.

Elsewhere, Nimrit Kaur Ahluwalia apologizes to MC Stan for making him feel left out when she takes Shiv away for her personal talks.

Further, Abdu shares the duties among the housemates while Ankit Gupta teases him by saying that he gets silent when Nimrit is the topic.

However, Abdu savagely replies that Ankit's Zaban (Tongue) has gotten longer (Ankit has become a chatterbox)  while Priyanka Choudhary used to be the more talkative out of the two.

Nimrit talks to Gori Nagori who finally feels that she has found a friend with whom she can vent to.

On the other hand, Abdu flirts with Nimrit once again and calls her more beautiful than any other contestant.

Meanwhile, Soundarya and Gautam keep bickering with each other about the incidents which make them jealous.

However, the bickering again turns into an argument.

At night, Soundarya and Gautam sit with Archana Gautam who tries to create humor by making fun of their relationship.

Salman Khan tells the contestants that one girl is particularly upset with Bigg Boss and shows a clip of Archana complaining that she has not gotten any new clothes.

Further, Salman greets the contestants that start arguing with Archana while reading out loud a whole list of clothes that have been sent out/in from the BBHouse.

Salman further bashes Archana telling her that all the crew members are not thieves who would take her clothes.

Archana says that she just wants to know if her mother got the luggage or not.

However, Salman scolds her saying that he should give her a tracking device which would ruin the purpose of Bigg Boss.

Bigg Boss is biased towards...?

Salman goes on to say that the topic of Bigg Boss is biased and talks to all the contestants.

Further, Salman tells Shalin Bhanot that Bigg Boss is not sending all the chicken just for him and tells him that the chicken being sent is for the whole house.

Salman asks the housemates who eat chicken every day and nobody raises their hands except for Shalin.

Tina and Archana reveal that they all get to eat chicken only once and that all the one that is sent on the weekends.

During the game, Salman gets impressed with Ankit as he bursts Archana's ballon saying that he does not need anyone's guidance.

Salman Khan gives Ankit two more chances to burst the balloon of people that he likes.

Moreover, Salman schools Priyanka to let Ankit speak more as she always jumps in while he talks.

After the task ends, Salman Khan congratulates Abdu and gifts him a hunk hamper which he can enjoy after his captaincy ends.

Salman bids them goodbye and tells the viewers that two very important guests are going to greet the housemates.

Inside the house, Janvi Kapoor and Sunny Kausal greet the housemates and tells them about their new movie Mili.

Janvi tells Abdu how she sees him complimenting everyone and tells him to compliment her too.

Abdu compliments Janvi and says that she is even more beautiful than Nimrit.

Afterward, the guests make the contestants play a game where they get asked questions on who is more likely relatable to the said sentence from two of the chosen housemates and dunk their faces in ice water.

MC Stan comes first with Ankit and Archana being the chosen contestants and he starts dunking the housemates he thinks which suits the more to the statement which turns out to be Archana for the most part.

The game continues with Nimrit Ahluwalia, Gautam Vig and Shalin Bhanot after which the guests leave the house.

Afterward, Nimrit is called with her friends Shalin and Gautam being the chosen contestants.

Unsurprisingly, Nimrit dunks Gautam's face for the most part when the statements are regarding playing fake in the game and not being loyal to their friendship.

The task ends and the guests bid goodbye to the housemates after which they greet Salman Khan on the set.

Salman praises Janvi's dancing skills while recalling a childhood moment of hers that makes her embarrassed.

Salman finally bids goodbye to the viewers with the promise to uncover more drama in the Weekend Ka Waar episode.

© Copyright tellybest.com, 2022, 2023. All Rights Reserved. Unauthorized use and/or duplication of any material from tellybest.com without written permission is strictly prohibited.
Cached Saved on: Monday 21st of November 2022 01:07:59 AMCached Disp on: Friday 9th of December 2022 03:57:32 AM