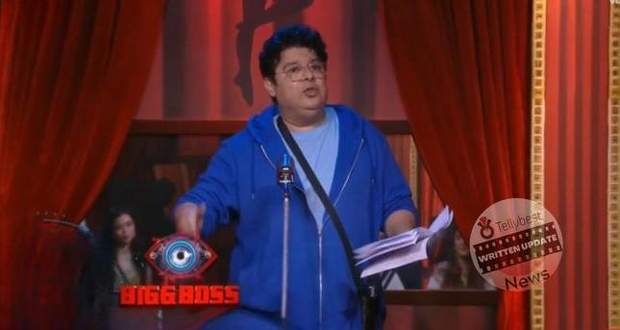 Today's Bigg Boss 16 4th October 2022 episode 4 (Day 4) starts with everyone waking up and reciting the oath which they all find very tiring.

Further, during breakfast and other duties, Priyanka Choudhary keeps helping Manya Singh even after Nimrit Ahluwalia keeps telling her to not go against the rule.

Nimrit gets called into the confession room

Bigg Boss calls Nimrit Ahluwalia into the confession room to have a talk regarding Priyanka Chahar Choudhary.

Bigg Boss tells Nimrit to release either Tinna, Soundarya, or Manya and replace them with Priyanka who just cannot understand the rules and regulations of BB16 house and feels sorry for them.

Nimrit chooses Manya to be replaced by Priyanka for all the household duties.

Nimrit goes outside and states the changes to everyone while Manya gets angry with the decision stating that she looks helpless in front of everyone.

Later, Bigg Boss asks Sajid Khan to hold a laughter stand-up show and states that he will get a prize if he can satisfy the contestants.

Afterward, Manya gossips to Archana Gautam that she despises Sumbul Touqueer and Shalin Barot for trying to become another version of Siddharth Shukla and Shehnaaz Gill.

Afterward, Bigg Boss tells all the housemates to give their reviews and many contestants state that they felt offended by his words.

Bigg Boss tells him that he is impressed by his comedy and gives him the privilege of distributing the ration among the housemates as per his desire.

Manya and Archana get offended by Sajid and confront him saying that they would prefer it if he didn't make jokes about them anymore.

Later, Sajid and Nimrit are discussing how to distribute the ration and think to give it equally to everyone.

Sajid tells Nimrit that he is going to keep the coffee for himself and makes a deal to give it to her when she needs more.

However, the male housemates start arguing about the chicken with the justification that they need it for protein.

On the other hand, Bigg Boss calls Shreejita, Shalin, and Shiv into the confession room and scolds them for dragging the makers into their argument for ration.

At night, Priyanka tells MC Stan that he is a coward for not protesting with her and the rest of the contestants while he argues that he didn't know that they were protesting again the chicken agenda.

Saundarya asks Sajid to give him coffee while Sajid tells her that she can ask for it any time she wants.

Afterward, Sumbul Touqueer gets offended by Shiv's words and tells him to not disrespect any girl in the house and not insult the food that they are eating.

Sumbul and Shiv argue and cry

Sumbul gets emotional cries while Shiv also feels bad and apologizes to him by bowing down to her.

Afterward, dinner is made while the contestants get worried as the rotis are not enough to feed their stomachs.

Gori Nagori states that Bigg Boss should let all the contestants cook for themselves while Sumbul tells Shalin that she will cook for him if it comes to that.

Later into the night, Gautam Vig instigates Abdu Rozik to steal from others' ration as no one will be able to scold him due to his cuteness.

Abdu thinks of it as a thrilling experience and steals eggs from Sajid's ration.

During the nighttime, MC reveals to Tina Dutta that he wishes to leave Bigg Boss while Archana tells him that he will regret it as Bigg Boss is a big opportunity for anyone.

© Copyright tellybest.com, 2022, 2023. All Rights Reserved. Unauthorized use and/or duplication of any material from tellybest.com without written permission is strictly prohibited.
Cached Saved on: Monday 21st of November 2022 02:36:33 PMCached Disp on: Thursday 1st of December 2022 11:38:15 AM