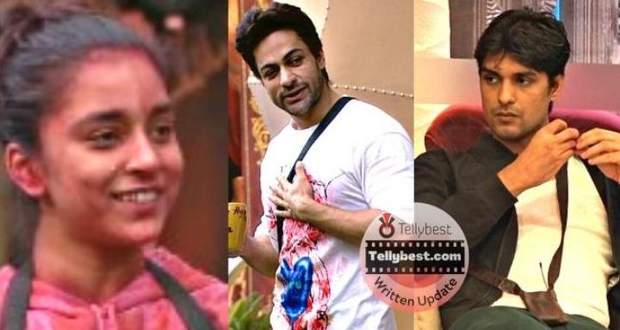 Today's Bigg Boss 16 5th December 2022 episode (day 66) starts with all the contestants waking up to the sound of sirens blaring as they go to the garden area and sing the BB Anthem with enthusiasm.

Afterward, Tina Datta and Shalin Bhanot are hugging while Archana Gautam bitches about them being fake to Priyanka Choudhary and Soundarya Sharma.

On the other hand, Nimrit Kaur Ahluwalia tells Sajid Khan that she will keep on sleeping and taking care of her health as it is her last day as the captain/queen.

Meanwhile, Shalin talks to Shiv Thakare and tells him that he wants to become the captain and wants his support.

Later, Shalin goes to Tina and she tells him that she is sure the housemates will try to make Sumbul Touqeer the winner and will plan against him.

Competitors will have to stain their clothes while one of their supporters will keep washing the stained clothes.

At the end of each round, the Sanchalak will inspect and find out who has the cleanest clothes.

Afterward, the winner will get to remove one contestant from the game.

Tina tells the family members to target Sumbul first as she wants her out and does not care afterward.

In the first round, Nimrit tries to cheat saying that Priyanka's clothes are the dirtiest while Bigg Boss reminds her to say the name of the contestants whose clothes are the cleanest.

Shalin becomes the winner and as a result, he removes Sumbul from the captaincy race while putting dirt on her face sticker.

Its Priyanka vs Ankit!

However, in the second round, Sumbul becomes Sanchalak & announces Priyanka as the winner.

Priyanka eliminates Shalin while Tina gets angry saying that she knew this would happen.

For the third round, Shalin becomes the coordinator while he tells both Priyanka and Ankit Gupta that he will be fair to them.

At the end of the last round, Shalin announces that Ankit is the winner and he becomes the captain.

Bigg Boss reminds Ankit that he has to put dirt on his opponent, Priyanka's photo while everyone laughs over it.

Afterward, Bigg Boss announces that Ankit has to allocate the rooms while the contestants in room two will be safe from elimination along with being the royal chefs and king's favorites.

Abdu, MC Stan Sumbul in the room of four while Nimrit, and the rest of the contestants go in the room six.

Tina Datta is a bad loser

The housemates fight over who will shower first as they still need to cook and do household duties.

Meanwhile, Bigg Boss asks Ankit how the game is going for him and he rushes to take his mic as he tells Bigg Boss that he hopes he will do things better.

Meanwhile, Sajid tells Sumbul and Nimrit that Tina told him to alternate between sitting with Shalin and Sumbul.

The girls get shocked when Sajid says that he told them that he will not do it.

Afterward, Shalin comes to Tina mourning about him losing the captaincy while she tells him that he brought it upon himself.

They both argue and walk out on each other simultaneously.

Archana goes to Nimrit and tells her that she will not accept the butcher house of the kitchen that has been made and that the rotis are left without being covered.

Further, Soundarya is crying to Archana and Priyanka about feeling bad that Ankit made Sajid a favorite while she was the one who had done everything for him.

Ankit comes there and Archana tells him that Soundarya wants to talk to him about something.

She takes Priyanka from there saying that they should let Ankit and Soundarya talk.

However, Priyanka goes back saying that she wants to hear Ankit's response while Archana tells her that Ankit won't be able to say anything in front of her.

Priyanka gets angry hearing this sentence and she starts arguing with her while asking Ankit to stand up for her.

However, Ankit doesn't say anything while Priyanka goes to her room in anger.

Archana tells Ankit and Soundarya to talk while she goes and comforts Priyanka.

Soundarya tells Ankit that she now knows her place for him in the game and tells him that he can go to comfort Priyanka.

Meanwhile, Archana tells Priyanka to not get triggered by little things.

Archana asks her if Ankit stepped up for her even once when she was saying that she wanted to stay there and hear his conversation with Soundarya.

Priyanka realizes that Archana is right and hugs her while telling her to save her.

Ankit comes there just then and hugs Priyanka telling her to not cry.

At night, Archana goes around the room asking for her blanket while Nimrit, Soundarya, and Priyanka tell her that she should ask Tina.

They look for Tina and find her sleeping on a couch which leads to the three girls talking about how Tina wants everything done her way and doesn't want to sleep in the same bed as Shalin while she hugs him the whole day.

Just then, Tina comes there and leaves after telling them that she is using her own blankets and has even taken permission to use two as she gets cold.