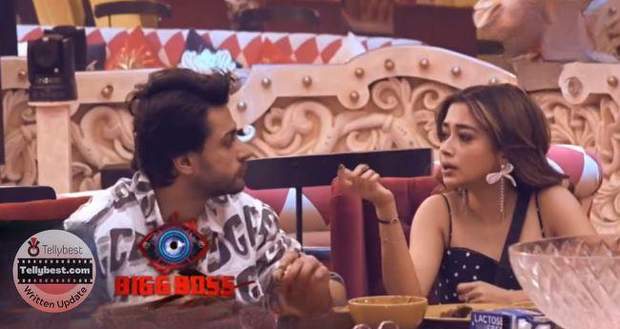 Today's Bigg Boss 16 5th January 2023 episode (day 97) starts with all the housemates waking up to the sound of sirens and going to the garden to sing the BB Anthem.

Archana Gautam is back in her form!

However, Shiv says that he just helped Tina Datta move it while Tina refuses to do that as she argues that she is not the only one who used it.

Archana fights with Tina while she says that she will see how Tina takes the steam iron now.

Later, Archana talks to Soundarya Sharma and says that she will call Tina a chor (thief) from now on.

Archana says that she just has to bear them for a month and she will be away from there after a week.

Meanwhile, Sajid Khan asks Sumbul Touqeer what will she do if her father likes a 22-year-old which angers Sumbul as she says that she will not let it happen if it is not based on love.

When Sajid crosses his boundary, Sumbul gets angry at him and does not get convinced when he apologizes to her.

Further, Bigg Boss calls the nominated contestants into the activity room where seven chests are kept.

A chance to be SAFE!

Bigg Boss tells the housemates that they are getting a chance to be safe from the nominations but only two contestants will be saved.

In the task, the contestants will get the chest with someone else's nameplate in it.

In each round, one contestant will get a ration in exchange for eliminating someone.

Tina and Shalin get each other while Sumbul gets Archana.

Sajid gets Sreejita De while Soundarya gets Sumbul.

Lastly, Sreejita gets Soundarya while Archana gets Sajid.

Sumbul, Sajid, Soundarya, and Sreejita nominate the person that is assigned to them while Archana argues that wants either Shalin or Tina to nominate for her to go last.

However, in the last round, Archana refuses to throw her chest while Shalin and Tina also refuse to do so.

All the seven nominated contestants continue mocking while Shalin blames Sajid saying that it is his fault that he is not able to convince Archana.

Sajid and Sumbul leave while Archana finally confesses that she has no reason for saving ration but has a problem with them.

At last, Bigg Boss asks for the final decision and discontinues the task while announcing that all the ration is taken back.

Bigg Boss announces that the nominated contestants will stay nominated too which makes Archana happy.

Later, Sajid and Archana keep on arguing with each other while Bigg Boss calls Priyanka Chahar Choudhary into the confession room.

Bigg Boss asks her what she thinks about who was right or wrong.

When Priyanka answers in circles, Bigg Boss tells her that it is high time she starts standing with the truth.

Meanwhile, Priyanka confronts both Tina and Shalin while Shalin continues to contradict his own sentences while he keeps on raising his voice.

Priyanka tells him that he is contradicting himself which angers her as he throws things away.

On the other hand, Sumbul is on a drama rant as she continues to talk about Shalin and Tina negatively.

Shiv and MC Stan joke as they tell Bigg Boss to call Sumbul into the medical room.

Later, Priyanka and Tina talk to each other while Tina tells her it is valid what Priyanka said.

Bigg Boss calls the housemates into the living room while telling them that he has brought dinner for them.

Shalin and Shiv rush to get dinner and they get disappointed to see only bananas and apples.

However, Abdu gets angry and sits away from them.

On the other hand, Shalin wears a wig and jokes with Shiv while giving him smooches.

Later, Sajid sits with Abdu and tells him that he has become arrogant after returning which he does not like.

Abdu afterward sits with Shiv and asks him how he has changed while Shiv says that he understands where Abdu is coming from.

Abdu says that he is also a contestant who wants to talk to other people but Sajid is not understanding that.

Shiv tells Abdu to hug Sajid before going to sleep as it will solve the tension happening between them.

At night, Archana tells Soundarya to be careful since she feels that Nimrit Kaur Ahluwalia is going to betray her next.

© Copyright tellybest.com, 2022, 2023. All Rights Reserved. Unauthorized use and/or duplication of any material from tellybest.com without written permission is strictly prohibited.
Cached Saved on: Wednesday 25th of January 2023 10:16:07 AMCached Disp on: Wednesday 1st of February 2023 08:51:34 PM