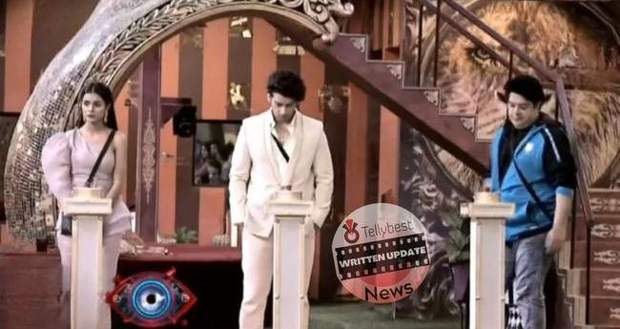 Salman Khan asks all the contestants about their opinions what they think about Sajid's game.

As everyone starts stating their points, most of the points concentrate on Sajid's lack of involvement in the tasks.

Meanwhile, Salman picks up Nimrit's point of Sajid having double standards, that is he takes a stand first and then steps back from it.

Salman tells Sajid that the audience is not liking his game in BB16.

10 Bigg Boss 16 contestants raise their hands supporting the statement that Sajid Khan is not serious about the game.

Sajid says that he has his cards hidden from all and that at the right time he will show them to all.

At this Salman states that there is no time in this game and he has to buck up.

Gori Nagori gets called a "mastermind" of BB16

Gori and Stan become the topic of mockery as Salman unveils their double game where Gori feels she has all the right plans but Shiv Thakare & Sajid Khan tells all about it.

Further, Sajid says after Gori's fight with Archana, Gori is feeling as if she is the next Archana.

Gori makes a face at Sajid's comment as he refers to her as 'beta, beta' again, and says she & Stan has been feeling bad after Shiv has been spending more time with Nimrit Kaur Ahluwalia.

After Salman Khan leaves the contestants, Gautam Vig says everyone can see double standards of everyone as Shiv's group seems to crumble after Mc Stan & Gori feels alienated.

Huma also appreciates Archana's game and tells her she is making Meerut proud.

Salman Khan makes fun of Archana Gautam as she wears the brace fit & asks Gautam to wear it too as they both recreate the husband-wife scene they did at the Bigg Boss 16 premiere.

Afterward, the guest Himani tells the contestants that they are going to get a chance to become the audience and tells them to express their opinions by going to the ‘Janta Sab Jaanti’ microphone.

Further, Salman bids goodbye to all the guests and tells the audience that he is going to teach the nominated housemates a lesson.

Salman calls the three nominated contestants Soundarya, Archana, and Sumbul onto the chairs at the podium.

Salman Khan tells them that they were curious as to what was being shown to the audience and now he is going to reveal it to them.

Salman shows Soundarya the clip where Shalin and Nimrit are making fun of their relationship while Soundarya gets shocked.

Meanwhile, Salman shows tweets to Archana which all mean to say that Archana is doing drama cause she is not getting attention and that her ego has inflated after Karan Kohar’s support.

However, Sumbul, Salman tells her that they cannot show her anything since she doesn’t do anything and also because the audience has stopped talking about her.

Afterward, Salman tells the three housemates to choose one contestant whom they trust.

Soundarya still selects Gautam after seeing all that he is done (or the lack thereof), Sumbul selects Sajid while Archana selects Priyanka Choudary.

Salman tells the three selected contestants to stand in front of a buzzer and tells them that they can save the nominated contestants from elimination by pressing the buzzer.

However, 25 lakhs of the amount will be deducted from the winning amount.

The round starts and all three contestants press the buzzer.

Salman announces that all three contestants are safe and bids them goodbye.

Gautam Singh Vig In A Quandry?

Afterward, Soundarya confronts Gautam and has a breakdown.

Gautam keeps his eyes focused on the cameras while he ‘tries’ to calm Soundarya.

Meanwhile. Shiv and Priyanka start an argument as they dig up old matters and call each other names.

Later, Gautam sits with Soundarya and talks to her while Tina Datta and Nimrit come there and explain to them that they were trying to tell the couple the same thing.

Further, both Soundarya and Gautam tell each other that they need time as Gautam leaves the room.

On the other hand, Shalin sits with Tina and tells her that the audience will beat Gautam with slippers once he comes out.

At night, Archana tells Sumbul that they are not allowed to discuss what Salman Khan showed them.

Archana argues with Sumbul for sharing what Salman told regarding her to the housemates and especially, Tina.

Archana even goes on to tell Sumbul that this is the reason why she is not going forward which angers both Sumbul and Tina as they start arguing against Archana.

© Copyright tellybest.com, 2022, 2023. All Rights Reserved. Unauthorized use and/or duplication of any material from tellybest.com without written permission is strictly prohibited.
Cached Saved on: Monday 21st of November 2022 02:02:30 AMCached Disp on: Tuesday 29th of November 2022 12:26:51 AM