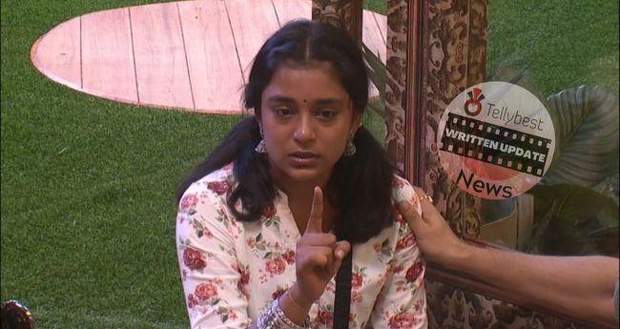 Today's Bigg Boss 16 5th October 2022 episode (Day 5) starts with all the contestants waking up and singing the BB16 Anthem.

While making breakfast, Abdu sings for Soundarya and they both do a little happy dance while laughing and enjoying themselves in front of Archana Gautam.

Bigg Boss announces that he has a task for them and tells the contestants Abdu and MC Stan that they will be competing against each other.

The contestants get confused as Bigg Boss states that Imlie, AKA Sumbul Touqueer will be MC's manager while Shiv Thakare will be Abdu's manager and they will have to convince other contestants to sign the No Objection board in the garden for the contestant they are representing along with making a reel with the signing participants.

Along with this, Bigg Boss announces that he is sending Internet Star, Kili Paul to help the contestants with the task and in making reels.

Kili Paul dances with Abdu Rozik who calls himself "Chotu Bhaijaan" and laughs with everyone.

Further, all the contestants dance with Paul to Bollywood songs that he knows.

Sumbul Touqeer for the win, defeats Shiv Thakare in the task

As the task starts, Sumbul manages to convince most of the contestants to sign MC's board while Shiv struggles to get the sign and ultimately loses.

Bigg Boss announces that it is time for Paul to leave and bids him goodbye after which he announces that MC Stan and Sumbul have won the task along with the privilege to choose which housemate will live in which room.

Most of the contestants argue that it is not MC's win but Sumbul's as the housemates signed due to her only.

Gautam Vig picks Abdu in his arms to say sorry

Gautam Vig picks Abdu in his arms and takes him away from the other contestants while apologizing to him.

Abdu tells him to not apologize while Gautam tells him that it is not him but due to other contestants he didn't choose Abdu as his bed partner.

At the same time, other contestants are also discussing who will partner with whom.

Just then, Manya Singh argues with Soundarya Sharma over breakfast and blasts her unnecessarily.

Manya Singh gets called a TV Vamp by Gautam

Later, Gautam takes Manya aside and tells her that he knows she is not like this and should not act like a Vamp to get the attention of the viewers and instead act like themselves.

Sumbul Touqeer in a relationship with Shalin Bhanot?

On the other hand, Tina Dutta takes Shalin Bhanot to the glass room and tells him that she has something to ask.

Tinna asks him if he's in any kind of relationship with Sumbul Touqueer and he refuses while Sumbul also comes there and agrees with Shalin.

Meanwhile, Archana Gautam disrespects Manya by telling her that many girls win Miss India and that she is not special.

Later, Bigg Boss tells Sumbul and MC Stan to announce who will be living in which room.

However, Sumbul makes a mistake in stating names and asks Bigg Boss if she can correct it.

Bigg Boss announces that it is a mistake on her part and that the designated will stay the way she stated initially regardless of the mistake.

Further, Sumbul feels guilty and cries while Shalin, Soundarya, and Shreejita console her saying that it was a genuine mistake.

Later in the night, Abdu raps saying that MC Stan is his friend while Sajid Khan asks him if he would leave his lover for Stan.

Abdu says that he will let go of his love for MC as they are friends while MC states that he would not as love is a priority for him.

Abdu acts as if he's betrayed and does drama while Sajid and MC praise him by laughing joyfully.

Shiv Thakare is a snake, that makes MC Stan cry

Afterward, Shiv Thakare, Gori Nagori, Sajid, and MC Stan are sitting together talking while Shiv picks an argument with MC stating that he is inhumane.

The argument escalates into a fight as Shiv curses at him and gets personal by stating that he will buy poor people like him and make them stand outside his home.

The housemates separate them and try to calm MC who keeps saying that this was uncalled for.

On the other hand,  Shiv shows even more attitude in front of Gautam telling him to stay out of things he doesn't know about.

Later, when he sees MC crying, he changes his whole attitude and hugs him stating that he never meant to hurt him.

© Copyright tellybest.com, 2022, 2023. All Rights Reserved. Unauthorized use and/or duplication of any material from tellybest.com without written permission is strictly prohibited.
Cached Saved on: Monday 21st of November 2022 08:26:39 AMCached Disp on: Tuesday 6th of December 2022 12:57:30 PM