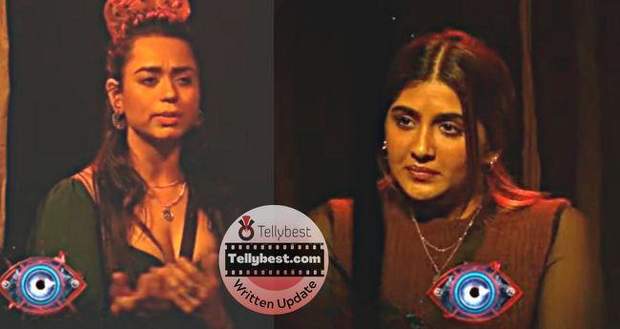 Today's Bigg Boss 16 6th December 2022 episode (day 67) starts with all the housemates waking up to the sirens as they gather in the garden and sing the BB Anthem.

Soundarya Sharma and Archana Gautam get irritated as Tina Datta has taken the bread in her room from the room it was given to.

Archana goes to Ankit Gupta and complains about Tina while Tina acts all mighty and tells Archana to take back the bread and keep it as her gratitude.

Afterward, Tina argues that she saw Soundarya take her coffee to another room and creates an argument over the ration.

Meanwhile, Sumbul Touqeer teases Sajid Khan and he starts acting as if he is hurt by her words.

Sumbul also starts acting angry while Sajid says that he was just acting.

Further, Sumbul and Abdu Rozik are playing board games while Sajid teases them and makes everyone laugh.

Later, Shalin Bhanot tries to talk to Tina but she ignores him and keeps doing her makeup.

Bigg Boss tells Tina to wear her mic while she puts on her mic and leaves from there.

Afterward, Soundarya gets ready in a beautiful dress while Shiv Thakare compliments her.

On the other hand, Abdu talks to Sajid that tells him that he thinks Shiv is upset with him.

However, Sajid tells him that Shiv likes him the most after himself and tells Abdu to not think about that.

Meanwhile, Archana argues to complete the food that has been made which Soundarya doesn't like and she tells Archana about it.

Sumbul gets pranked and cries

Sajid, Nimrit Kaur Ahluwalia, and Shiv Thakare prank Sumbul by saying that she is not loyal to them.

Sumbul starts crying while they all rush to console her saying that they were just joking with her.

Afterward, Bigg Boss tells Tina to bring all the housemates into the activity room and talks about Dayan.

Further, Bigg Boss tells the housemates that the king of the BB House, Ankit is under Dayaan's control for the time being.

Bigg Boss tells Ankit to give the names of six contestants who will get the privilege to nominate other contestants.

However, Sajid and Priyanka cannot be nominated since they are royal chefs and MC Stan is already eliminated from nominations.

Ankit chooses Priyanka Choudhary, Soundarya, Archana, Sumbul, Shiv, and Shalin as the name of people who get the privilege to nominate other people.

Tina and others get nominated for elimination!

At the end of the task, Bigg Boss announces that the nominated contestants are Tina, Sumbul, Nimrit, and MC Stan.

Archana asks Soundarya why she got angry with Sajid and she says that she just spoke her mind since she did not like yesterday's task's outcome.

At night, Archana goes to Tina and tries to make up with her with a sweet dish while she asks her what she should celebrate her captaincy?

Later, Archana sits with Sajid's friend group and tells them about how she talked about Shalin's wife not knowing he was divorced and his mood shifting drastically.

Stan looks around the house for lemon while Soundarya brings it from the hidden place and gives it to him.

Meanwhile, Abdu goes to his friends one by one and explains to them how he felt disappointed by his friends because of them not noticing his loneliness and saying that they all talk in Hindi even when he comes to sit with them.

Elsewhere, Tina asks Shalin how he is her strength and he tells her that he went to people and requested them to talk to her so that she doesn't feel bad.

However, Tina tells him that he is putting her down and making her look weak.

While everyone is sleeping, Nimrit argues with Soundarya and Archana saying that she does not think Ankit is competent enough to become the captain.

Archana tells her that she is wrong to think that as the show is about playing mind games and Ankit is doing better than her but she just does not realize it yet.