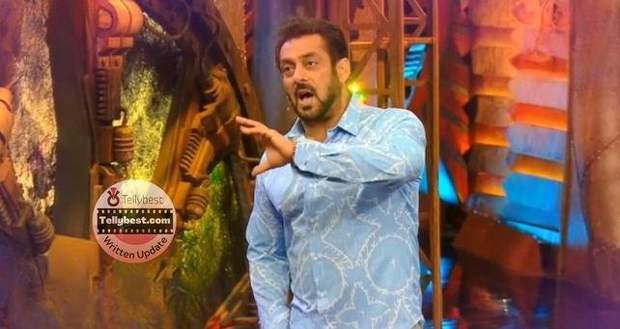 Today's Bigg Boss 16 6th January 2023 episode (day 98) starts with Priyanka getting ready while she keeps on taunting Shalin for acting tough and then admitting that he is scared of elimination.

Shalin angrily stands up from the bed and leaves his food unfinished as he loudly says that Priyanka won't even let a person eat their food calmly.

Further, Salman Khan greets the audience and tells them that a task is going on inside the house.

In the task, the housemates have to tell whom the person they think is very blurry in their game and put shaving cream on their face.

Most of the contestants including Sumbul Touqeer Khan, MC Stan, Shiv Thakare, Archana Gautam, and others select Tina Datta and Shalin Bhanot as the blurry persons of the house.

Abdu Rozik also selects Shalin Bhanot and reasons that Shalin acts too much and is not real.

While putting shaving cream on Shalin, Abdu laughs as he says that Shalin is an 'Accha Insaan' (Good Man) which makes everyone laugh.

Priyanka Chahar Choudhary also calls Shalin onto the stage as she says that she does not like that Shalin is contradictory and tells him that he should make his friendship clear to Tina.

Shalin argues that he wants to talk and throws the can of foam away from her which angers many contestants.

Tina also calls Shalin and starts exposing him by saying that Shalin gets aggressive and reveals how he insulted and degraded Priyanka in the morning.

She sprays foam on his face while saying that friends do not tell each other things they have done for each other.

While sitting back in her seat, Tina also reveals that Shalin said that Sumbul was in love with him and lied about having someone outside to cover it up.

Shalin ignores the questions of the housemates and calls Nimrit Kaur Ahluwalia and Archana Gautam onto the stage with old excuses.

The task ends and Tina tells the whole thing to Sumbul while she gets angry.

Afterward, Sreejita De and Tina are talking while Sumbul tells them from inside the stall that she did not say anything like that.

Later, Archana tells Sajid Khan and other housemates that Shiv played a game of being diplomatic.

Sajid refuses to listen to Sumbul's genuine complains and tells her that he thinks she is fake.

She asks him what he thinks is fake from her and he argues that she fake cries like when she cried regarding the ration the previous day.

Shalin and Tina BREAK UP!

Sumbul's mood gets down and she leaves while Nimrit tells him that he should stop telling her off all the time.

On the other hand, Shalin and Tina argue and break their friendship while continuing their drama.

Sajid then goes to Sumbul and makes up with them.

Salman Khan greets the housemates and tells them that he going to talk to the three people who wanted to talk to Bigg Boss so eagerly this week.

Salman goes to Tina first and asks her what other game she is playing other than the Bigg Boss game.

Tina says that she does not know while Salman tells the other contestants to clarify what he is talking about.

The contestants tell that Tina is playing the love game with Shalin while Tina argues that she is not playing any games.

Salman scolds her and tells her that she is very hypocritical since she says that she cannot fall in love with Shalin and then dances closely with him.

He continues scolding Tina while he reveals that all the housemates were called into the confession room this week to answer their point of view on Shalin and Tina's relationship.

He reveals that all the housemates think that the relationship is fake from his side while asking why she told Shalin that he is making her fall in love with her.

Tina says that she said it in a friendly way while Salman tells her that she cannot do what he said.

Sajid interrupts and requests Salman to not be hard on Tina which pisses off Salman.

Salman tells him to repeat it again which makes him realize his mistake while the housemates tell him that Salman is only explaining to Tina.

Salman asks Sajid if he understands what was happening while Salman scolds him and explains to him that he was talking in his favor.

Sajid argues with Salman and tells him to call him in while Salman tells him that he is going to get in more trouble only.

Salman asks Tina why she said 'you're making me fall in love with you' and 'I love you, Shalin Bhanot' was not said in a friendly way.

Salman tells Tina that he only wants her to make clear whether she is in a relationship with Shalin or not.

He also scolds her for wanting to speak to Bigg Boss all the time since Bigg Boss is not their counselor.

In the end, Salman tells Tina to not think about it since it is her life and he is no one to tell her anything.

Later, the housemates talk to Shalin and explain to him that Salman was trying to talk to him only.

Meanwhile, on the stage, Salman tells the housemates that they will get to the topic of MC Stan and Archana the next day as they had crossed all their limits in the Bigg Boss house.