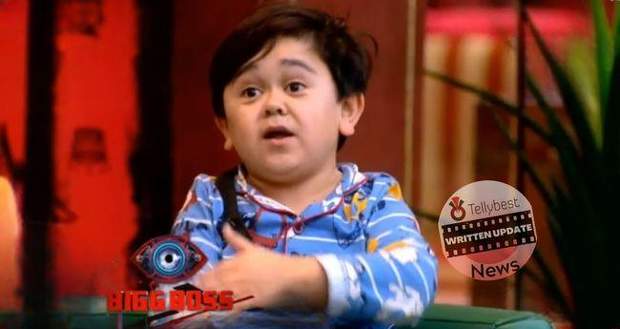 Today's Bigg Boss 16 6th November 2022 episode (day 36) starts with Archana Gautam telling Sumbul Touqueer that her attitude is the reason why she's not going anywhere in both the show and the film.

Sumbul gets angry as she tells Archana to search her name and see what she is and then talk about where she is going and not going.

The argument gets heated as Archana also refuses to back down from the fight.

Archana boasts of getting movies while they all are only living through the television.

Meanwhile, Gautam Vig is telling Soundarya Sharma to not talk to the people who talk behind their backs as it is dangerous for their relationship.

On the other hand, Archana starts blabbering about the intertwined relationships between Shalin Bhanot, Tina Datta, Gautam, and Soundarya after which she addresses Tina as Bhabhi which angers her.

Shalin goes to Soundarya and Gautam to tell them about Archana's drama while Archana justifies herself and talks back rudely.

Archana gets angry at Sumbul and tells her that she can't be of anyone if she won't listen to her father.

Sumbul gets angry and gets in Archana's face telling her to not speak about her father.

Tina holds back Sumbul from physically harming Archana while Priyanka Choudhary tries to make Archana realize what she is doing in her blinding rage.

Afterward, Sumbul, Shalin, and Tina keep instigating Archana by acting out her fake stories and assumptions.

Shalin tries to talk to Tina while telling him that she won't let anyone ruin her character and will get angry at anyone who doesn't respect her.

Tina later talks to the camera and tells Bigg Boss to give a sign on whether her talking to Shalin is right or not.

Afterward, both the friend groups sit and discuss while Abdu Rozik puts Shiv Thakare and Shalin in jail for making jokes.

Nimrit Kaur Ahluwalia also jokes and Abdu puts her in jail teasingly while getting them out after some time.

During lunch, Archana demands all the Bhindi from room six and she says that will let the vegetables rot but will not give them to her or the other contestants.

Further, Tina gossips to Shalin about Sumbul stealing his jacket and saying that she took it without him noticing.

On the other hand, Abdu keeps pointing out the lack of cleaning done inside the house and declares that he will give two-hour punishment to them.

Archana keeps telling Abdu to punish Nimrit while he tells her that he is the captain, not her.

Further, Archana, Soundarya, Gautam, Ankit Gupta, and Priyanka are gossiping about the rest of the contestants while Abdu is getting praised by his group.

At night, Archana tells Soundarya that she is upset with Abdu.

In the morning, Archana keeps instigating Abdu by shouting that Nimrit is sleeping and that the captain should be punished.

Abdu also shouts that Archana has gotten a blabbering mouth and goes to check if Nimrit is sleeping or not.

However, Archana refuses to state that she needs a proper reason while Abdu stalks to the bathroom area angrily.

Nimrit picks up Abdu's discarded mic from the ground and goes after him while he comes back outside and tells Archana that Bigg Boss should not have brought in stupid people like her.

Afterward, Nimrit and others calm Abdu while Archana tells Sajid that she sees Abdu as a competition and will behave with him like one.

In the end, Abdu changes the duties and makes Archana clean the bathroom areas.

Afterward, Archana keeps lying on the bed while Abdu and the others tell her to not fall asleep.

Archana tells Abdu to bark only if she falls asleep and tells him to go away.

Abdu gets frustrated and cries while Shalin and others comfort him.

Later, a puppet monkey takes Shekhar Suman's place and makes jokes while saying that he will host the Bigg Bulletin now.

Shekhar comes there and makes the monkey leave after which he calls all the contestant's animals from the zoo of Bigg Boss.

Shekhar tells Archana that she is an expert in creating fires around people.

Afterward, Shekhar makes comments on the housemates in the form of shayri.

A special guest on the Big Bulletin

The monkey comes back and states which animals the contestants were in the jungle.

Archana comes out as a crow while Tina becomes a dear.

Nimrit becomes a crocodile while Priyanka comes out as the attention-seeking Mowgli.

Abdu gets praised as he is claimed to be the race-winning turtle.

Shekhar bids goodbye to all the contestants and leaves.

Tina gets jealous of Sumbul

Later, as everyone is having dinner, Priyanka states that Shalin's chicken becomes a laughingstock while Bigg Boss tells all the gossiping contestants to not whisper and talk loudly.

As for the My Glamm competition, Sumbul jumps two places and takes Tina's place which she does not like.

Further, during dinner, Priyanka sees that she has a lesser portion than others and complains to Nimrit about it who is in charge of the cooking.

However, Nimrit calls her petty which starts an argument between the two.

© Copyright tellybest.com, 2022, 2023. All Rights Reserved. Unauthorized use and/or duplication of any material from tellybest.com without written permission is strictly prohibited.
Cached Saved on: Monday 21st of November 2022 02:41:32 AMCached Disp on: Friday 9th of December 2022 04:00:33 AM