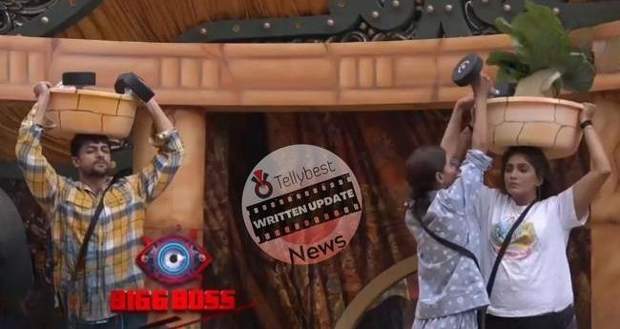 Today's Bigg Boss 16 6th October 2022 episode (Day 6) starts with Sumbul Touqeer crying as she feels everyone treats her as a kid in the Bigg Boss House.

She discusses this with Sajid Khan on the lawns and Sajid laughs, asking Sumbul if she treated Bigg Boss as a picnic spot.

He asks her to look at Abdu who tries to stay positive despite not knowing the language and also being a year younger than Sumbul.

Gori Nagori comes to console a crying Imlie while Sajid says Sumbul shouldn't care as all the contestants are not her friends.

Shalin Bhanot VS Nimrit Ahluwalia to be the next captain

Later, Priyanka reads out a task given by Bigg Boss to be held between Shalin & Nimrit over the captaincy.

Both of them have to hold a basket over their heads as all the contestants have to add weights to their baskets.

Whoever loses his or her balance will lose the task and the other will resume being the captain of the BB16 house.

To match Shalin's weight, Priyanka adds one fumble to Nimrit's basket which makes her cry due to the heaviness.

Nirmit wins in the task

However, Shalin's basket breaks first which makes Bigg Boss declare Nimrit Ahluwalia to be the winner of this task and resume her captaincy.

Bigg Boss then scolds Soundarya for not playing safe and appearing polite as she won't get brownie points for it. When there is a task given, she has to play it as authentically as possible and not say sorry here and there.

Sumbul gets comforted by Shalin, says she is not "mentally strong"

Later, Shalin goes to console a crying Sumbul who states that she is not mentally strong for this game and not liking how the other contestants are treating her.

Shalin calls Sumbul a very mature personality and reveals someone was questioning whether they are in a love relationship or not.

In the kitchen, Archana takes Shalin's side and fights with Soundarya for adding the unnecessary weight of a glass vase to Shalin's basket.

Archana tells Soundarya brutally that the task was not fair for Shalin while Tinna tells Archana not to speak rudely.

Tinna Dutta gets angry with Gautam and tells him not to speak to her anymore.

Tinna then goes to bitch about Shreejita De taunting Shalin after the task and Sumbul feels Tina is also angry with her.

Archana fights with Manya for her "Sil Batta"

Later, Archana scolds Manya for picking her "Sil Batta" during the task as she cannot do it since it is Archana's personal property.

Manya then drags Priyanka into the argument saying she also added weight to Nimrit's basket while Tinna declares that Shiv & Manya play dirty.

Afterward, Nimrit transfers all the cooking duties to Archana and asks other contestants not to make a lounge when they go into the smoking room, otherwise she will hand out punishments to them on the spot.

Gori saves herself from the elimination process

Bigg Boss asks Gori Nagori to perform a dance as a task and if she gets successful in it, she can save herself or the other nominated contestant from elimination.

Only the nominated contestants can dance with Gori on the stage and they all give her full support, making Gori win the task.

However, Gori saves herself from the eviction, making Guatam sneakily glare at her.

Archana jokingly tells Gori not to take any money from her since she will be calling Gori to perform in her next election in front of lots of crowds.

At night, Gautam and Abdu hug each other while Abdu Roziq promises Guatam to be his wingman in the future for all the ladies that enter his life.

Shiv also has a heartfelt conversation with Abdu about missing home and Abdu advises him not to take the hate personally.

At one in the night, Tinna tells Shalin privately that she gets negative vibes from Sreejita De and cannot be herself in front of her which makes Shalin talk about this with Nimrit.

They both call Tinna a "bacchi" and Nimrit warns Shalin not to lead on Tina if he is not interested in her romantically.

© Copyright tellybest.com, 2022, 2023. All Rights Reserved. Unauthorized use and/or duplication of any material from tellybest.com without written permission is strictly prohibited.
Cached Saved on: Monday 21st of November 2022 07:50:34 AMCached Disp on: Tuesday 6th of December 2022 11:55:33 AM