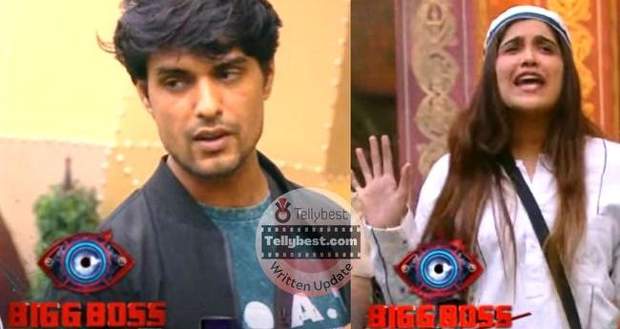 Today's Bigg Boss 16 7th December 2022 episode (day 68) starts with all the housemates waking up and going to the garden as they do their daily routine of singing the BB Anthem and dancing to it.

Afterward, Nimrit Kaur Ahluwalia lies in her bed with a comforter covering herself as she tells her friend group about her conversation with Archana Gautam and Soundarya Sharma the previous day.

She gets emotional and starts crying as she tells them that she feels irritated by all the housemates.

Sajid Khan asks her a reason for her crying and frustration while Sajid argues that he does not like listening to problems that he cannot help solve.

Nimrit tries to explain the situation to him but Sajid does not get it and irritates an already overstimulated Nimrit.

She starts crying saying that she cannot vent her emotions to the people she considers her friends.

Ankit Gupta gets a warning Again AND Again!

Further, the wake-up alarm sounds due to Archana, Priyanka Choudhary, and Tina Dutta sleeping when they are not supposed to.

Afterward, Shalin Bhanot requests Sajid to talk to Tina as she is a little bit upset and seems down.

Shiv and Sajid sit with Tina and talk to her while Shiv reveals his romantic relationship with a past contestant in the BB Marathi house.

Later, Bigg Boss announces that it is time for a new task while mocking and teasing Ankit Gupta for the way he is ruling his captaincy.

Bigg Boss tells Ankit that since he doesn't like taking on the responsibilities of the captaincy, he should give the names of the contestants he does not want to be in the captaincy race.

Sajid, Abdu, Nimrit, Shiv, Archana, and MC Stan lose their chance at captaincy while Priyanka, Soundarya, Tina, Shalin, and Sumbul Touqeer get the chance to win the next captaincy.

In each round, Bigg Boss will give an activity that the jailor has to make the prisoners do while the prisoners will also get a chance to escape and regain the chance at captaincy.

The race to captaincy begins!

If three prisoners manage to escape, the six of them will get the chance at captaincy while the jailors will lose their chance.

In the first round, Soundarya has to make the prisoners make something from clay.

Meanwhile, the prisoner will get the chance to escape if they can get the imprint of the key on the clay.

Shiv and Archana manage to steal the key but Ankit argues that they used violence which is not allowed.

Bigg Boss intervenes and tells the housemates that since Ankit is incompetent as a coordinator, Bigg Boss himself will complete the process for them.

Even after two clear imprints, Ankit says that they are not valid since he has disqualified the prisoners and Bigg Boss accepts his decision which angers the prisoners.

Bigg Boss asks Ankit if he would be able to go through with the task and tells them to continue on to the next round.

Shiv manages to escape and as a result, he cannot partake in the task anymore.

For the third round, Priyanka has to teach the prisoners the values of BB House while the prisoners will have to go through the tunnel to win.

The task gets violent and Ankit disqualifies everyone which causes them to argue.

Further, Bigg Boss asks Ankit demeaning questions while Ankit replies to all of them and stands by his judgment.

In the end, Bigg Boss announces that this is the end of the task and even though the prisoners should win according to the rules, because of Ankit's judgments, they lost the task.

A secret mission for Shiv, Nimrit, and Archana!

Afterward, Shiv, Nimrit, and Archana feel happy at Bigg Boss praising them while Sajid tells them that they wasted their energy since they were going to lose anyways.

At night, Bigg Boss 16 calls Tina, Shiv, and Nimrit into the confession and tells them that both Sajid and Ankit think that the task is in favor of the other group.

Bigg Boss tells them to get the explanation for their thinking out of the two while the three also give their own opinions on why the two are acting that way.

Further, Bigg Boss tells them that Ankit does not want to participate and that it seems Sajid is the same way.

Elsewhere, MC Stan and Sajid steal chocolates from Abdu which makes him upset since he was saving them up for Nimrit's birthday.