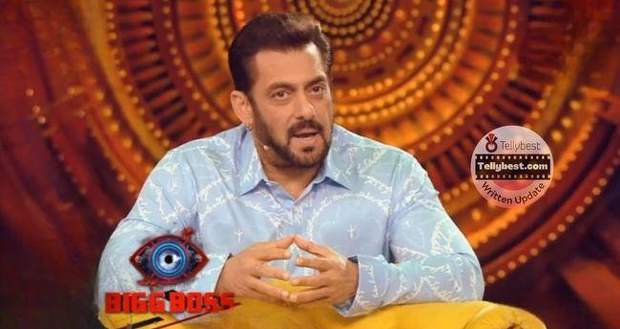 Today's Bigg Boss 16 7th January 2023 episode (day 99) starts with Salman Khan greeting the audience & housemates and talking about how they wasted their time on Shalin Bhanot and Tina Datta today.

Salman gets on the screen while the housemates continue talking to each other and do not hear Salman.

Priyanka Chahar Choudhary and Tina Datta rush to the couch as they realize that Salman has come.

Meanwhile, Shalin Bhanot has still not come and is in his own world while Salman talks to the housemates, and Shiv Thakare rushes to call Shalin to the living area.

Salman also sends Shiv back to the place where Shalin was and asks him if he can hear him.

Further, Salman mocks Shalin and says that people become blind in love but Shalin has become deaf in love.

Salman further talks and laughs as he says that the whole episode became Tina and Shalin's.

While Shalin tries to talk back, Salman ends the topic and starts mockingly praising Archana Gautam.

Further, Salman asks the housemates who were more wrong in the fight between Archana and MC Stan.

The housemates say that Archana's actions were confusing while Salman tells them about all that Archana said clearly.

However, Archana continues arguing with Salman and tells him that she is right while Salman tells her that her job was to tell captain Abdu Rozik and it was his job to get it done.

Archana argues that Stan used to talk about her matters and puts her head down while saying that she is right.

Salman leaves trying to explain to her and questions Stan about what he said to Archana and if his words were justified or not.

Stan reasons that he knows what he said was worded wrongly but he did not mean anything wrong.

Salman again goes back to Archana and tells her that she told Stan that he has entered the house in 'Khairat' but it is her who has returned to the show on Khairat.

Archana continues to justify herself and says that she is not wrong while Salman talks about all the incidents where Archana created drama using her words.

Salman leaves saying that both Archana and Stan are at fault while Archana argues with the housemates and says that it is not right.

She says that she will consider the house as a set from now on and will not do anything.

Priyanka tries to talk to Archana but ends up fighting with her while Salman watches everything with hawk-like eyes.

Explaining to Archana, Salman tells Archana that he has nothing to say to Stan since he knows his mistake and has accepted.

Afterward, Salman explains that the real person at fault was Sreejita De as she was the one who gave misinformation to Stan and instigated the fight.

Sreejita refuses to take the word while Salman tells her that this is why Bigg Boss told her many times to not talk about that matter.

Sreejita is the HIDDEN PLAYER?

Sreejita finally takes the word while it is revealed that Archana did not curse Stan but was only quoting a song of MC Stan.

Salman tells her that she is in the wrong as she wanted to create drama during the elimination time and that is why she did not listen to five warnings from Bigg Boss.

Archana apologizes to Salman and says that she will not talk about anything again.

Further, Salman tells them to do a task in which he will give them a sentence and they will have to guess who is the contestant that has said and give that person a health shot.

BB16 Housemates gets a REALITY CHECK!

Tina guesses all the sentences correctly while Soundarya Sharma fails to realize that Priyanka called her Archana's babysitter.

As the task ends, Sajid Khan tells Sumbul Touqeer that she can leave him if she wants as it is just his punchline about him saving her because of her cooking.

Sumbul says that she does not mind while Sajid goes to Shalin and says that Tina has no option but to hold his hand.

Sajid goes to Tina and also tells her that she has no option but to hold Shalin's hand.

Elsewhere, Nimrit Kaur Ahluwalia apologizes to Shiv while he forgives her.

Later, MC Stan and Shiv talk about their suspicion that Tina has someone outside the house.

On the other hand, Salman Khan welcomes the family of the contestants.

Archana and Stan's relatives fight while Salman jokes that they should have been the ones inside the house.

Salman also asks Shalin and Tina's mothers their opinions on the pair's relationship.

Salman also asks the families about their opinion on Mandali which cause an argument between Tina and Stan's mother on whether their friendship is better or not.

Further, Salman bids them goodbye and lets them go into the BB house.

Salman further greets the housemates once again and tells them that the contestants in the bottom four are Shalin, Soundarya, Tina, and Archana.

Salman asks the housemates who they think is the most real and fake person from the bottom four contestants.

Almost all the housemates select Archana to be real while Shalin is said to be the fakest.

Salman tells the bottom four that he has revealed their positions to make them realize that the fans only vote for those who are real and stay in one character.

Salman tells them that there is no elimination and bids them goodbye.

Later, Shalin cries saying that he has been played with while Shiv, Sreejita, and others comfort him.

They go to Tina afterward but she refuses to go to him since she does not want to show that she likes him.

Priyanka asks Tina if she can see herself with Shalin in the future and Tina clearly responds no.

© Copyright tellybest.com, 2022, 2023. All Rights Reserved. Unauthorized use and/or duplication of any material from tellybest.com without written permission is strictly prohibited.
Cached Saved on: Wednesday 25th of January 2023 01:27:27 PMCached Disp on: Sunday 5th of February 2023 03:12:53 AM