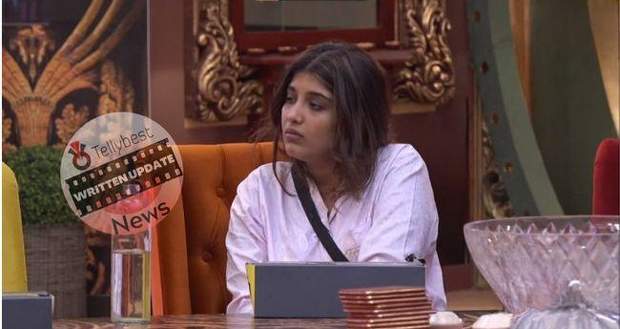 Today's Bigg Boss 16 7th November 2022 episode (day 38) starts with Soundarya Sharma and Gautam Vig romancing while Abdu and Shiv Thakare are imitating them and teasing them.

Meanwhile, Priyanka Choudhary argues with Nimrit Kaur Ahluwalia and accuses her of giving smaller portions to her.

The issue extends further with Nimrit screeching at Priyanka that she would slap her.

Moreover, Nimrit calls names to Priyanka which saddens her mood.

Later at night, Nimrit and others wish Ankit Gupta a happy birthday while Priyanka tells him that they are doing it to make her upset since she doesn't have anything sweet to wish him with.

The day starts with all the contestants waking up and singing the BB Anthem.

Sajid Khan asks Shiv if Ankit and Priyanka are fighting.

Meanwhile, Ankit and Priyanka are sitting beside each other as if they are strangers.

Gori tries to console MC Stan while he stays still.

Meanwhile, Sajid argues with Gori for stealing from their room while she argues that she is taking the food as she is also a part of the room.

Sajid gets angry and says that he will throw out all the food while he starts cursing.

Sajid demands to get Gori kicked out of the room while he goes out and tells Gori that she should ask before giving anything to anyone.

Gori starts arguing with him while crying and tells him to throw out the food as he said earlier.

Sajid goes to his room and tells the others that he's going to throw out the food while Shiv and Ankit stop him.

Later, Priyanka sits with Ankit and asks him if he would support her if she gets into an argument like Soundarya-Gautam and Shalin-Tina.

Ankit is about to answer while Priyanka tells him that she does not expect anything from him.

Stan sits with Priyanka and tells her that Gori is being wrongly accused while Priyanka tells him that he should stand up for her if he thinks she's right.

At the same time, Archana Gautam talks to the cameras and tells them that Stan should not have entered the BB if he did not intend to play for long.

Further, Gautam and Soundarya are talking about Stan and how the rest of the members of room six are upset because Gori is talking to them.

Meanwhile, Tina Datta tells Shalin that she does not want to start anything in front of the National television while he looks at the camera and states that they are just very good friends.

Abdu gets a love warning!

Sajid tells Abdu Rozik to not fall in love with Nimrit as she likes him but not in a romantic way.

MC Stan goes to the confession room and tells Bigg Boss that he does not feel like staying inside anymore.

Bigg Boss asks him what he is having a problem with and Stan discusses the argument within the room six contestants.

Stan thanks Bigg Boss and exits the room while Sajid starts questioning him.

A crack between #PriyAnkit

On the other hand, Priyanka talks with Ankit and tells him that she is upset with him for not supporting her which creates an argument between them.

Later, Bigg Boss tells all the contestants to write the ten ration items of their choice which makes everyone excited.

However, Bigg Boss reveals that only half of the contestants will get their ration.

For the task, two contestants' rations will be delivered after each bell while another contestant will be selected as the delivery executive who will have to choose between the two rations which one to keep and which one to return to Bigg Boss.

For the first delivery, Stan is the delivery executive and he keeps Shiv's ration while returning Gori's ration.

Further, Archana goes to Gori and calls Shiv and Stan snakes while Bigg Boss tells her to speak loudly and repeat what she said.

Archana repeats her statement and Priyanka makes a comment to Ankit about the situation.

Shiv starts fighting with Priyanka for commenting instead of Archana who is the main root of the drama.

Archana and Soundarya go to another room and laugh as Priyanka became the target.

Sajid tries to calm Priyanka while she tells him that she is not wrong as she did not say anything wrong.

For the next delivery, Sumbul Touqueer delivers Sajid's ration while returning Tina's food.

However, Bigg Boss demands a reason from Sumbul for returning Tina's food.

Sumbul makes up excuses and lies that it is because of Sajid having a particular food pallet and his medical problems.

Tina demands Sumbul to give a viable answer and Sumbul states that she did it because Tina is bossy in the kitchen.

Tina gets angry and tells Shalin that she said from day one that Sumbul is fake and that they have wasted 5 lakhs on her.

For the next delivery, Gori chooses Priyanka's ration and lets go of Archana's ration which all the housemates expected.

Later, Sumbul and Tina are talking while Shalin starts arguing with Sumbul and leaves from there angrily.

Sumbul gets upset with Shalin's words and leaves while Tina goes after her and tries to talk to her.

Shalin breaks his friendship with Sumbul

Sumbul tells Tina that she did not like how Shalin entered their equation and states that she will not talk to him anymore.

Tina tells Sumbul that it is her personal matter and she does not want to comment anything on it.

Sumbul confesses to Tina that she had a personal reason which makes Tina leave from there without another word.

© Copyright tellybest.com, 2022, 2023. All Rights Reserved. Unauthorized use and/or duplication of any material from tellybest.com without written permission is strictly prohibited.
Cached Saved on: Monday 21st of November 2022 07:00:21 AMCached Disp on: Monday 5th of December 2022 12:40:45 AM