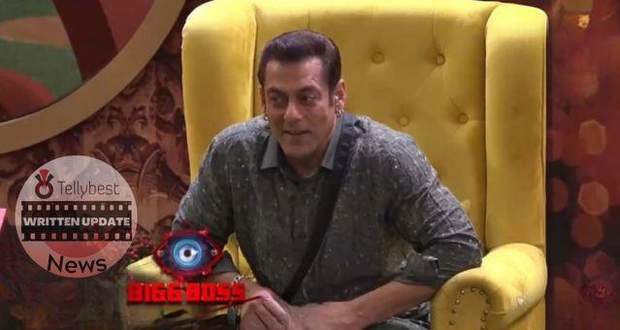 Before Salman Khan enters, a clip shows of Nimrit Kaur telling Gautam & Shalin how Tina stole her shampoo and conditioner.

Meanwhile, Sreejita De and Gori Nagori talk about Manya Singh considering herself to be a big shot as compared to others.

After Salman Khan enters Bigg Boss Season 16 house, Abdu is the first one to hug him while Salman gives Abdu small weights for his workout as a gift.

Salman also teases Abdu if he wants his future girlfriend to be hot & sexy but Abdu says she should also have a good heart.

After this, Salman Khan congratulates Nimrit on her captaincy and comes to question Priyanka Choudhary if she likes the title of "Jagat Mata" given to her by Gautam Vig.

Archana Gautam laughs out loud when Salman asks her which contestant's chutney she would make since her "Silbatta" game is strong and on point.

Afterward, Salman urges Gori Nagori to show her talent to everyone and she dances alongside Sumbul who impresses the contestants with her moves on the "Paramsundari" song.

Salman Khan then says he will invite one person from the contestants to have a feast with him and that contestant will invite another person and a chain will form like this.

A Feast For 10 Special BB16 Contestants

However, only 10 people can eat with Salman Khan. Abdu is the first one to get invited who invites Nimrit Kaur Ahluwalia, who then asks Gautam, followed by Shalin, Sumbul, Tinna, Soundarya, MC Stan, Sajid, and Shiv at the end.

In BB16 house, Manya Singh and Srijita De get into a fight where Manya calls Sreejita a TV "shaitaan" and asks who she is in front of Manya who has been India's ambassador as she was a runner-up of Miss India.

Salman Khan scolds Gautam for not being original and asks him to leave his acting persona when playing the game.

Everyone starts to eat and Abdu digs straight into the delicious chicken.

Tinna Dutta informs Salman Khan that there are two teams formed now with Ankit and Priyanka being in one while she, Gautam, Sumbul, and Nimrit are in another.

However, Sumbul says she is no team and Salman Khan calls her a "complain Chachi". Sumbul says everyone treats her as a kid while Salman hints that the people she is sitting near only consider her to be a child, subtly taking a dig at Tina.

Nimrit also lets Salman know that she talks to everyone but Priyanka is the only one whom she hasn't talked properly with.

Nimrit also adds that due to his loyalty to Priyanka, Ankit is not able to mingle with everyone else.

Salman Khan then asks Mc Stan who is playing fake and who takes the most footage. Stan says Gautam ate the footage on the day when he and Shiv got into a fight while Shalin is acting.

MC Stan gets scolded by Salman who says he doesn't want to see Stan leave the house in just one week as he is strong-willed and not think about leaving the show.

Salman then takes Shalin's class and sternly asks him to not be a counselor as his advice is not at all good and Bigg Boss 16 house doesn't run or revolve around him.

Gautam Vig then tells Mc Stan he only came for him since Stan started crying and he started to feel Stan's pain.

However, Salman Khan interrupts Gautam and tells everyone not to throw words like "I have seen enough", and "I have done a lot of hard work" since everyone does it and it is not to be proved publicly.

A clip gets shown to the 10 contestants and Salman asks Sajid to dub it. The video is of Ankit who looks beyond bored sitting between Manya & Priyanka. Sajid dubs Ankit's voice, saying he looks as if he wants to go home.

Outside, the atmosphere of the house is still heated up due to Manya and Srijeeta's argument.

Before bidding farewell, Salman Khan tells everyone to be original.

At night, Sajid Khan asks what Nimrit thinks of Priyanka and Ankit's relationship Nimrit says Ankit has platonic feelings for her but Priyanka seems too attached.

Meanwhile, Gautam lets out his frustration saying why everyone labels him for "groupism" when they do the same thing.

Before going to sleep, Shalin & Tina get into an argument when Tinna lets Shalin know he is giving her trust issues regarding Sreejita.

However, Shalin storms off and says only Tina has a problem in this house.

© Copyright tellybest.com, 2022, 2023. All Rights Reserved. Unauthorized use and/or duplication of any material from tellybest.com without written permission is strictly prohibited.
Cached Saved on: Monday 21st of November 2022 07:14:50 AMCached Disp on: Wednesday 7th of December 2022 04:10:20 PM