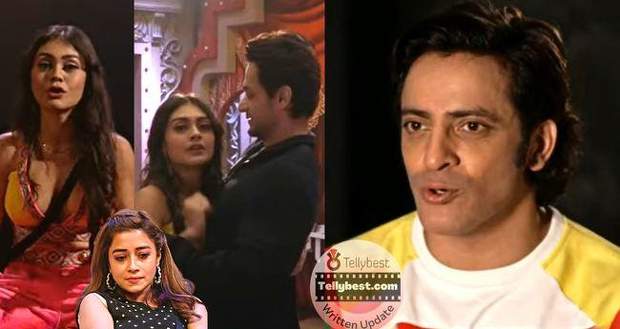 Today's Bigg Boss 16 8th December 2022 episode (day 69) starts with Shalin Bhanot & Tina Datta having a mild, couple argument about how he runs behind her while she uses him.

Shalin says that it looks like that on the screen while Tina says she doesn't want any of his favors.

Both of them again have a mild argument in the bathroom as Sumbul Touqeer Khan passes by them, seeing them fight.

Nimrit doesn't appreciate Sajid complimenting Priyanka and states that anyone can do anything when responsibility is placed on them.

Later, Shalin goes to Priyanka and tells what Nimrit said about her, that she cannot tolerate her for too long.

Priyanka laughs & says she used to think Nimrit is better than Tina but it seems otherwise now.

The next morning, the BB16 contestants wake up and sing the Bigg Boss anthem.

Bigg Boss collects them all in the living room and says their action-less tasks have bored him and he is scared that the viewers are bored as well.

Sreejita is the new wildcard AND yoga teacher!

Bigg Boss informs all of them that there is a new yoga teacher in the house to teach them how to play.

The TV comes alive and the contestants guess that it is Sreejita De who is sitting in a yogic posture.

Nimrit is called first by Sreejita who reminds Nimmo that she is very strong. Sreejita guides Nimrit in yoga and then calls Ankit Gupta inside.

Ankit gets awkward as Sreejita says he has fallen in love.

She advises him to open up fully since he has the power to overpower everyone while also asking if Priyanka feels jealous when he talks to other girls.

Priyanka who is sitting on the sofa prays that Ankit says something in her defense and Ankit denies it to Sreejita.

He states that he takes time to open up and congratulates her on her marriage next year.

Sumbul is called next, and Sreejita asks her to be fully active as this is a grand opportunity and she hasn't been eliminated yet.

Next comes Tina and she starts to argue again with Sreejita says Tina has a black heart and negative energy.

Sri asks Tina to do a cobra pose as she is a snake but Tina doesn't do it while Sajid gets amazed at how they can argue.

After Tina leaves, Bigg Boss thanks Sreejita for stirring up drama and asks her to make the house happening as she is the first wild card entry.

Later, Sreejita hugs Shalin in front of the camera tightly while everyone whistles.

Tina roams alone in the house & locks herself in the bathroom while everyone is happy to welcome Sreejita who did not get a chance before to shine.

Sreejita sits with Nimrit and Soundarya and tells them about all of the things that Tina had said.

Meanwhile, Sajid sits with Tina in the dressing area and tells her how Sreejita hugged him in front of the camera and was imitating her.

Sreejita reveals to Nimrit and Soundarya about a conversation she had with Tina about getting set with a loaded guy so to make their lives easier.

Later, Tina sits with Sajid. Ankit and Priyanka as she tells them that she is sure Sreejita is going to target her personally.

Priyanka reveals that she is upset as she asks Ankit if she is really stopping him from talking to other people.

Afterward, Soundarya goes to Tina and asks her why she used her tofu and gave it to Shiv.

Tina tells her that she asked Shiv and he told her that it was his tofu which is why she made it.

Soundarya and Tina start arguing while Tina starts crying and acts like the victim while Soundarya says that she did nothing to make Tina cry.

However, Shalin tells Soundarya to leave the room and calms Tina who keeps crying and says that she really did not take Soundarya’s food intentionally.

Afterward, Tina looks towards all the cameras and tells them that she does want to go home to Zuzu.

NO Ration Task this week!

Bigg Boss informs the housemates that the ration for the week is kept in the store room and that they will get 3 minutes to get the ration that they need.

Further, the housemates all work together and empty the whole storeroom to get all the ration.

However, Bigg Boss scolds them and tells them that they have to individually get the ration for themselves.

Housemates at WAR for food!

The task is done again and all the housemates collect whatever they can so that they do not leave the task empty-handed.

Afterward, Sreejita complains to Soundarya about how Shalin threw her bags.

Shalin jokes with Soundarya while Tina does not like it and argues with Shalin about it telling him to keep his equations about it.

At night, Soundarya keeps on telling Shiv that she does not want the tofu he gave her if he thinks of it as a beg.

further, Soundarya sits with Archana as she tells her that Tina is constantly poking at her for the vegan issue as if she has something in mind.