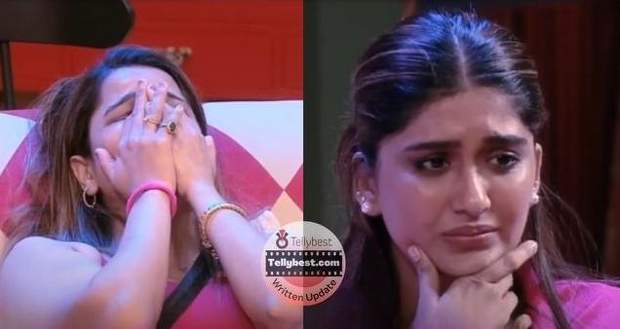 Shalin tells him that he always prioritized her over the game and how could she play him.

Sajid informs him about talking to Tina Dutta last night and telling her that she is left with two choices only that is either join hands with Shalin or stop talking to him completely.

Adding further, Sajid advises him that if he wants to maintain his dignity, then let her come to talk.

The siren goes off and the housemates come for BB16 anthem.

Shiv Thakare goes and wakes her up.

Later, Shiv teases Sumbul for waking up late asking everyone to clap for her but Sumbul goes off on him.

MC Stan, Abdu, and Shiv chill out in Maahim’s canal.

Sreejita tells the girls that she dreamt about her boyfriend after a long time and Priyanka was also there in her dream.

Shalin Bhanot is a Fool??

On the other hand, Sajid goes and sits in another girl gang consisting of Soundarya, Archana, and Sumbul.

He tells the girls that Shalin is very much affected by all of the things that happened.

He adds that Shalin feels offended because he couldn’t decipher things right.

They discuss that if Shalin is clever then he would not go back to Tina to talk.

Sumbul and Shalin bring fruits and milk cartons that Bigg Boss sent for them for the breakfast.

Shiv teases Sumbul again for waking up late as she boils milk on the stove.

Sumbul gets annoyed with him and asks him to not make a "mudda" (topic) of it.

Later, Nimrit and Sumbul are sitting under Maahim’s canal when Soundarya comes there and pranks them that Bigg Boss has sent rice and asks them to take it.

Nimrit and Sumbul come out of the canal but realize that it was a prank as Shiv and Stan run for the canal.

Nimrit gets angry over Shiv for pranking her and fooling around every time.

Sajid sees both Sumbul and Nimrit and Sumbul becomes teary-eyed as she complains to him that Shiv had been teasing her.

Later, Shiv mollifies Nimrit and apologizes to both Sumbul and her in a filmy style by writing Sorry on a plate using tissues.

Abdu sees it and destroys it which upsets Nimrit and MC Stan laughs calling Sajid that Nimrit is also filmy.

Later, Abdu flirts with Soundarya in the Captain’s room and Soundarya flirts back with him.

Sajid asks Abdu if he is in love again to which he says yes and continues to flirt with Abdu.

MC Stan jokes that now next Weekend Ka Vaar will be on you after which Abdu shrieks that he was just kidding.

Meanwhile, Shalin apologizes to Soundarya for the things he said about her and asks for a fresh start.

However, Soundarya turns him down saying that it happens every time.

On the other hand, Priyanka and Tina talk about Shalin, and Tina says that Shalin is playing the victim card and tainting her image.

Priyanka tells her that Shalin is saying something about having babies with him which angers Tina and she stands up to talk to him.

Sreejita is talking to Shalin about Tina that Tina self-proclaims herself as a brand.

Priyanka calls her out and Shalin goes to talk to Tina on the terrace.

Sajid Becomes The Matchmaker for Shalin-Na!

On the terrace, Shalin asks Tina if she ever loved him and she replies that she did have feelings for him to some extent but after Weekend Ka Vaar she does not want anything to do with him.

Their argument starts again in which they drag Sajid to clarify things.

Sajid talks to them while Shiv and MC Stan wonder if Sajid is again resolving their issue.

Later at night, Shiv and Stan start having fun after the lights go off which irritates Sajid and he goes out for some time.

Abdu joins Shiv and Stan and later goes to sleep in the captain’s room.

Later, Shekhar Suman greets the BB16 contestants as they await the weekend segment with him.

This time, Mr. Suman is back with a standing camera and tells the housemates all the complaints that the camera has for them.

Shekhar shows the photograph of Shalin when he was pretending to be a girl and tells Shiv he has now got a "Shalin" (honorable & sweet) girl for himself inside the house.

Suman also teases Abdu and shows his photo where he is wrapped in the red towel after enjoying the Jacuzzi Abdu looks down and says "Arrey Yaar" in his reply.

Shekhar Suman asks Archana about her imagination of Bigg Boss and she states that she envisions him to be 6 feet tall.

Shekhar leaves the contestants to enjoy themselves after making them stand and holds their ears, saying sorry for diffusing the drama when it is needed for the camera to capture.

Suman bids them goodbye and the camera shifts to Nimrit who hugs Shiv after their slight misunderstanding.

Later, the Mandali discusses that it is not Shalin & Tina because of whom the ration amount went down but Priyanka too as Archana was irked by her. However, Nimrit says that all three of them are at fault.

Later, Bigg Boss 16 announces a task sponsored by Hershey Kisses where each contestant has to offer a Hershey chocolate to a person with whom they have the fondest memory of last year.

Soundarya takes Archana's name while Abdu tells everyone that he missed them when he went out of the house. He says now that he is back, he is happier.

On the other hand, Soundarya can be seen getting emotional in the bathroom with Shalin and saying after coming here, she has gotten a lot more exposure.

She says she trusts people at face value and then the manipulation begins.

In the garden area, Sumbul cries on the bench but Shiv and Stan come to bring her back to the bedroom.

Sajid asks her what happened and she just smiles at him sadly.

© Copyright tellybest.com, 2022, 2023. All Rights Reserved. Unauthorized use and/or duplication of any material from tellybest.com without written permission is strictly prohibited.
Cached Saved on: Wednesday 25th of January 2023 09:03:48 AMCached Disp on: Monday 6th of February 2023 06:06:29 AM