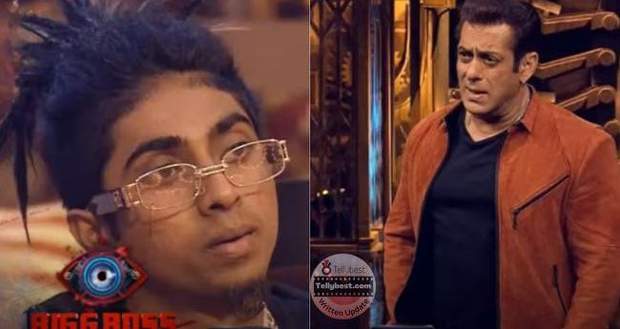 Today's Bigg Boss 16 9th December 2022 episode (day 70) starts with Salman Khan greeting the audience in his unique way and telling the viewers that they will have more wildcards along with Sreejita De who is already inside the house.

Salman tells the audience that they will see first what is happening inside the house.

Soundarya is Vegan or Vegetarian?

Inside the house, Shiv Thakare talks with Sajid Khan about Soundarya Sharma stretching the tofu issue to get footage and saying that he did not bitch about her but only discussed a sentence that she had used.

Further, Tina Datta and MC Stan sit and talk to each other saying that they are not made for the Bigg Boss show as they tell Bigg Boss to take them out of there.

Meanwhile, Sreejita gossips to Priyanka Choudhary, Archana Gautam, and Soundarya that Tina and Shalin Bhanot are suited for each other as they both are negative only.

Afterward, Salman greets all the housemates and jokes about Shalin's chest area being shown and tells the housemates to stand behind the couch as he has something to discuss with them,

Salman talks about three invisible inside the house and takes the names ZuuZuu, Ram, and Dolly.

Nimrit Kaur Ahluwalia says that it must be regarding Tina while Salman agrees and says that the invisible contestants are now a BB16 issue since Tina is the one who brought the names inside the house.

The housemates laugh as Salman tells them that the three contestants are sitting on the couch while Tina looks down in shame.

Salman mocks by having a one-sided conversation with the three invisible contestants and asks Tina what she thinks of it.

However, Tina starts crying as she says that it won't happen again and apologizes saying that she was just missing her friends since no one wants to listen to her inside the House.

Salman tells Tina that he is standing in front of her and asks her what is bothering her.

Tina says that she does not want to talk in front of the housemates as they will make fun of her.

Salman tells her that she should learn to play alone as it will be a life lesson for her and reminds her that all the winners have played alone.

Meanwhile, inside the house, Archana talks about Dolly and suspects that she must have set up Shalin and Tina's 'love angle'.

Afterward, Salman tells the housemates that he wants them to play as individuals and asks them to raise their hands so know that they are in a 'Mandali' (group).

Sajid raises his hands as he says that is the one who is the leader and does not care about the show.

Sajid is the BEST PLAYER?

Salman further reveals the complaints of Nimrit, Shiv, and Abdu Rozik to the housemates and especially, Sajid about Sajid.

Salman reveals how Sajid is in everyone's good books and has been getting the benefits no matter who becomes the captain.

Further, Salman tells the housemates that Shalin is by far playing the best game out of everyone.

Salman also reveals that Sajid, Shalin, and Ankit Gupta are playing the same and teases them saying that Priyanka and Tina have the same complaint as Nimrit.

Afterward, Salman comes to the topic of MC Stan and asks him if he really wants to leave.

Salman further tries to convince Stan saying that his fans are making him really famous and are eager to see what he does in the future.

Further, Salman says that he has a gift for Stan and has a basket sent to him which has his girlfriend's hoodie and a photo frame of his family.

A special gift for Stan!

Stan says that he will play is best from now and hugs the hoodie to his chest.

Salman bids them goodbye while Archana laughs that she does not understand how Stan got strength from a piece of clothing while Shiv tells her that it is because she has not fallen in love yet.

Tina sits with Shalin and tells him that she knows how to not let people take advantage of her anymore.

Meanwhile, on the stage, Salman greets the new wildcard contestant, Vikas Manaktala, and gives him a warm greeting.

Salman wishes him good luck and sends him inside while he welcomes the cast of Durga and Charu who promote their show on the show.

Afterward, Salman greets the contestants and tells them that he has a gift for the girls and asks them if they want it.

The housemates guess that it must be a male wildcard contestant and the girls tell Salman that they want the gift.

As soon as Vikas enters the house, Salman makes him reveal his views on the housemates by making him do a task where he has to put the housemates into one of the six categories.

The task ends and Salman tells the housemates to handle it from now on as he bids them goodbye.

Tina stands up to Shalin!

Sajid talks to Nimrit and Shiv saying that they should not sit with him as it might ruin both their and his public image.

On the other hand, Tina asks Vikas how she is fake and he tells her that he thinks she is being fake by playing safe and not taking risks.

Further, Sajid reminds the ladies that Vikas is married while Priyanka says that she did not ask for a male contestant to flirt with him.

Ankit gets possessive and says that Priyanka cannot even flirt even if she wants to and pulls her to him while she laughs saying that he is getting possessive.

© Copyright tellybest.com, 2022, 2023. All Rights Reserved. Unauthorized use and/or duplication of any material from tellybest.com without written permission is strictly prohibited.
Cached Saved on: Wednesday 25th of January 2023 05:22:05 PMCached Disp on: Monday 6th of February 2023 04:22:59 AM