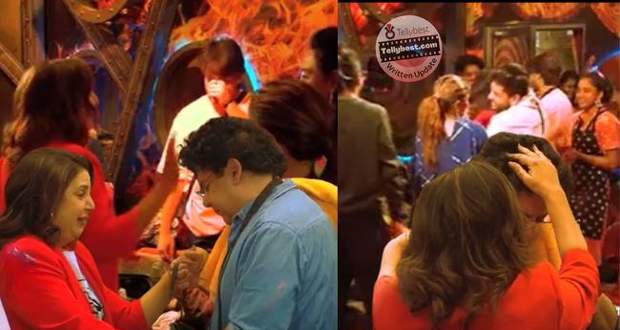 Today's Bigg Boss 16 9th January 2023 episode (day 101) starts with all the housemates waking up to the sound of a siren as they go to the garden and sing the BB Anthem.

Archana Gautam tells Bigg Boss that she wants someone to come inside and motivate her.

Further, Bigg Boss calls all the housemates into the living room and tells them that he is sending VVIPs inside the House as a late gift.

The housemates get excited as they learn that Bigg Boss has sent a ration while Bigg Boss tells the housemates that each housemate will get a free day since the VVIP representing them will have to do the duty that day.

Housemates get their ration back!

On the first task, Abdu Rozik moves and laughs as he was in the middle of changing his clothes when the freeze happened.

Further, Farah Khan enters the BB House and rushes to Sajid while she gets emotional and tells him that she missed him a lot while continuously reminding him to not lose the ration by talking.

She goes to all the housemates and praises them for handling Sajid while she thanks Shiv Thakare and MC Stan for supporting Sajid and becoming his family.

Farah in the BB House!

Farah talks to all the housemates and talks about how they all are playing well and tells Priyanka Chahar Choudhary that she is the Deepika Padukone of BB House.

Further, she jokes that Shalin Bhanot and Tina Datta have become the most talked couple.

Afterward, Farah jokes with the housemates & Bigg Boss tells them to freeze again.

Shiv's mother enters next and she walks to Shiv while telling him that she is very happy to see him in the show.

Further, Shiv unfreezes and hugs his mother while saying that he is not going to cry.

Shiv's mother talks with him and Stan while revealing that they should not involve the family in their fights.

Shiv's mother also reveals how much she did not like it when Tina fought with Shiv.

Lastly, Priyanka's brother Yogesh enters the house and the housemates mistake him for Priyanka's older brother.

Priyanka laughs as she reveals that he is her younger brother.

Further, the house divides into three groups and they all start taking advice from the family members.

Shiv's mother Asha advises Shalin and Tina to be civil with each other while Shiv jokes that they are a lost cause.

On the other hand, Farah jokes that Tina is nicer to Maahim than she is to Shalin at which everyone laughs.

Later, everyone sits to eat together while Archana goes to make food for Shiv's mother while Farah jokes that Archana has become the daughter-in-law.

Shalin later asks Farah whether Tina is faking it or not and Farah says that she think's Tina is a little arrogant.

Sajid comes there and tells her that Shalin is a dumb person and she agrees.

Afterward, Shalin talks to Sumbul Touqeer Khan and apologizes to her while she gives very curt replies.

On the other hand, Tina talks to Farah and asks her for advice regarding her relationship with Sajid while Sajid also comes there and sits with them.

The housemates joke that the pair have made Farah a couples counselor.

Later, Farah sits with Archana Gautam and tells her that she is liked by everyone outside and should not change herself.

Bigg Boss announces that the housemates get to nominate the whole category.

Bigg Boss calls Farah into the confession room first and she gets surprised to see the categories tagged with a certain amount of money.

Housemates get their 20 Lakhs Prize Money back!

MC Stan goes and nominates the Active group while Abdu reveals to Nimrit that he chose the Hyperactive category.

Lastly, Bigg Boss announces that Lost Category got the most votes and as a result, Sreejita, Sumbul, Nimrit, and Stan are nominated for elimination.

© Copyright tellybest.com, 2022, 2023. All Rights Reserved. Unauthorized use and/or duplication of any material from tellybest.com without written permission is strictly prohibited.
Cached Saved on: Wednesday 25th of January 2023 11:51:13 AMCached Disp on: Wednesday 1st of February 2023 09:43:46 PM