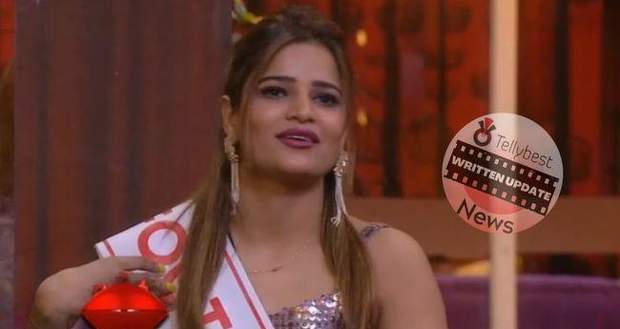 Today's Bigg Boss 16 9th October 2022 episode (Day 9) starts with Sajid Khan telling Abdu Rozik that they have to request Bigg Boss for pizza in a special way and makes Abdu wink and blow a kiss to the camera for pizza.

Soundarya Sharma goes to Nimrit Kaur Ahluwalia and tells her to relieve Priyanka Choudhary from her duties as she is not able to do them and is getting sick.

However, Nimrit reasons that it is not her right to relieve Priyanka from her duties as Bigg Boss has specifically said that the punishment has to be done until further orders from Bigg Boss only.

On the other hand, Shalin Bhanot and Tina Datta are talking and bitching about Nimrit being too in her head about her being the captain.

At the same time, MC Stan and Shiv Thakare sit together and keep glancing at a lonely Sumbul Touqueer sitting on the bench and stating that Shalin is just using her to get attention.

Later, Shalin helps Soundarya in fixing the treadmill and she kisses him as a token of appreciation while Tina teases herwanting to get a reaction out of Sumbul or Shalin.

However, Gautam Vig is brought into the joke and he does not like it which causes a small altercation between him and Tina afterward.

Sumbul later reveals to Shalin that she feels she is not accepted into any conversation while he goes and tells Tina about it and requests her to talk and include Sumbul in her conversations.

While Archana is making lunch, Abdu acts as if throwing the sheep statue into the pool stating that it is Archana only.

Meanwhile, Shalin and Gautam Vig are talking to each other about the morning's events regarding the kiss and the Sumbul situation while Shalin blames everything on Tina.

Tina comes there and reveals the truth that Shalin begged her to save him from Sumbul as she is sticking to him the whole day.

Towards the evening, Sajid, Shiv, MC Stan, and Gori Nagori talk to Abdu and ask his opinion on whether he thinks Sumbul is good or not and if they should include her in their group.

At the same time, Gautam is still arguing with Tina telling her that she should not have asked Soundarya to kiss Shalin while Soundarya herself states that it was just a friendly kiss.

Bigg Boss announces that the contestants will get to talk with the audience and will have to answer their questions.

The audience asks very serious questions such as Shalin playing on the back foot by targetting Sajid, Ankit Sharma, and Priyanka for not supporting each other even after being good friends and Nimrit misusing the power as a captain.

Bigg Boss also asks the contestants if they agree with the audience or not which creates some great discussion.

Many fans also support their favorite contestants such as telling other contestants to not treat Abdu as a child only, giving support to Sumbul and MC telling them to stay strong.

During the break, Ankit and Priyanka get into an argument about how they should portray their friendship while she leaves saying that she does not want to fake whatever they have and does not need his fake friendship.

On the other side of the BB16 House, Abdu sings the song Mustafa Mustafa and entertains.

Shekhar Suman greets the housemates through a video call while the contestants get worried thinking that he has come as a new contestant.

However, Shekhar informs them that he is here to uncover the true faces of the contestants with the segment named Big Bulletin with Shekhar Suman.

Shekhar tells Shalin to not go head to head with Sajid or else he might get defeated while telling Sumbul to play her own game as she doesn't need anyone else to spice up the drama.

Shekhar further gives advice to MC Stan in the form of rap and compares Abdu to GST tax stating that he is everywhere.

Further, Shekhar praises Abdu saying that he is the tallest man in the house as he has raised the bar for everyone.

Lastly, Shekhar tells Abdu to act as a candle and tells Nimrit to take an oath that she will try to do her duties as a captain fairly and will try not to get scolded by Bigg Boss 16.

Afterward, Priyanka enters the newsroom and greets Shekhar Suman as the first guest of the segment.