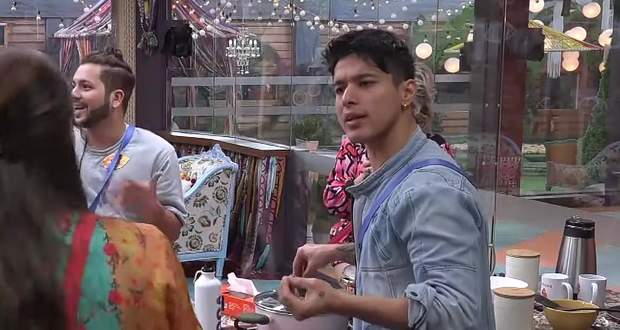 Akshara Singh talks about dividing the food because she doesn't get food as she is the last one to get food.

Divya Agarwal and Urfi Javed take the blame upon themselves and start arguing with her.

Shamita Shetty says that she should have written her name on the food container and says that it's a petty issue.

Everyone starts arguing and Akshara says that she will not eat anything and Shamita comments on it.

Later, Bigg Boss announces that it is time to test the connections and tells them to welcome the famous matchmaker Seema Taparia.

Seema starts talking to all the pairs of connections one by one and grades them at the end.

Elsewhere, Pratik Sehejpal and Divya again get into an argument regarding cooking and drag Akshara into it.

Meanwhile, Seema gives the rankings based on what she thought and puts Pratik-Akshara first.

Bigg Boss announces that since the contestants could not come to a decision, according to Seema's grades, Pratik and Akshara are the best connection.

Further, Bigg Boss gives them the titles of Boss Man and Boss Lady and announces that they will be taking the decisions of the house.

Lastly, Bigg Boss announces that the female housemates have been given back all their items as the report card given by the audience has gotten a good review for housemates.

© Copyright tellybest.com, 2020, 2021. All Rights Reserved. Unauthorized use and/or duplication of any material from tellybest.com without written permission is strictly prohibited.
Cached Saved on: Thursday 20th of January 2022 04:22:00 PMCached Disp on: Friday 21st of January 2022 05:18:33 PM