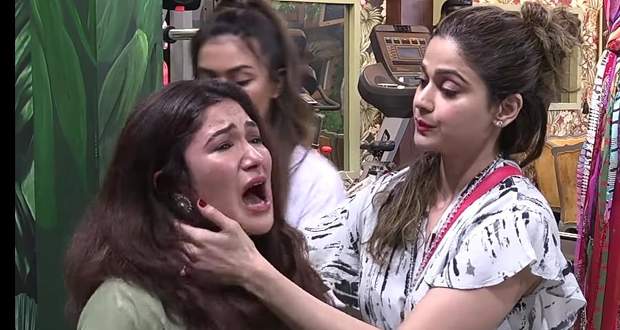 Nishant Bhat complains about the quantity of food ingredients to Bigg Boss while Muskaan Jattana and Pratik Sehejpal laugh at him.

The first crime is of being 'Kaam Chor' (Slacker) and Ridhima creates a big argument with Pratik over it.

Nishant sides with Pratik and Ridhima started crying saying that she is being bullied.

In the end, Panch decides to blame being a slacker on Moose and Nishant.

Neha reveals to Pratik that housemates are behaving differently with her because she's friends with him while Shamita badmouths Pratik.

Elsewhere, Pratik gets emotional feeling disheartened while Neha and Akshara calm him.

Later, Bigg Boss announces that the blame of 'Kaamchor' taken by Panch is unsupported by the audience and hence Divya Agarwal and Zeeshan Khan are nominated for elimination.

The second blame to be put on is being unhygienic and the Panch again decides to choose the connection of Moose and Nishant.

Pratik tries to talk to Neha while she is upset at him for taking her name in being unhygienic and refuses to talk to him.

At night, Bigg Boss announces that the audience is unsupportive of Panch's decision and hence Karan and Ridhima are nominated.

© Copyright tellybest.com, 2020, 2021. All Rights Reserved. Unauthorized use and/or duplication of any material from tellybest.com without written permission is strictly prohibited.
Cached Saved on: Monday 17th of January 2022 10:15:15 AM