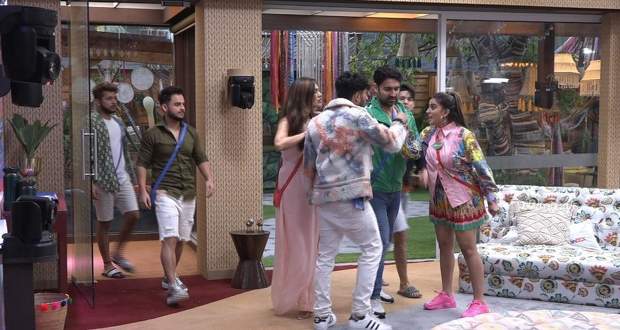 Today's Bigg Boss OTT 21 August 2021 episode of season 15 starts with everyone getting up to the song 'Lucky Tu Lucky Me'.

Bigg Boss gives the task of giving bitcoins to other contestants whom they find Safe, Simple, Compliant, Transparent, or Reliable.

At the end of the task, Milind has been announced as the most valuable player.

Further, Zeeshan asks Akshara to clean up her boxes which turns into a very heated up argument. During the argument, Akshara gets hurt by mistake and blames Zeeshan for it.

Later, Akshara demands Bigg Boss to call her into the confession room.

Akshara is called into the medical room because she was hurt.

Meanwhile, Pratik, Zeeshan, and Nishant try to put their point of view by talking over others.

Later, Zeeshan tells everyone that whatever he said he was not intending to be Bossy and apologizes to them.

Further, Bigg Boss calls everyone to the living room to inform them that demanding Bigg Boss to call them to the confession room is not acceptable. Bigg Boss warns the contestants that they should not do any inappropriate things to make Bigg Boss fulfill their demands.

Later, Bigg Boss announces that the audience is happy with the contestant's performance hence they won't be having tasks for the next day.
At night, Raqesh tries to irritate his connection, Shamita while sleeping which makes a fun moment for all the contestants.