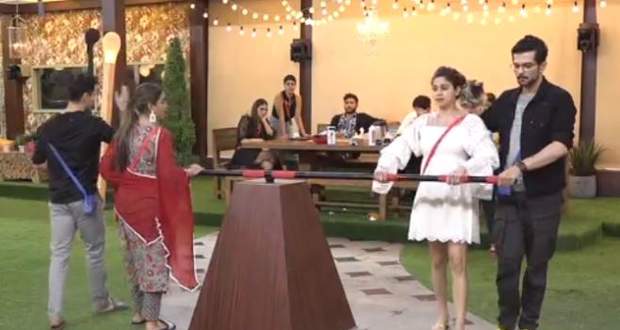 The day starts with everyone waking up to the song 'Saturday Saturday'.

Bigg Boss tells the contestants to nominate 2 pairs of connections for the punishment that will be given by Bigg Boss.

Later, the contestants inform Bigg Boss that Pratik-Akshara and Raqesh-Shamita are the connections selected for punishment.

After a while, Bigg Boss announces that the selected connections have to rotate a 'Chakki' placed in the garden area. The rules are explained by Bigg Boss and both the connections get started with their punishment.

During the punishment, Nishant tells that it's a good idea to make everyone sit and watch the task which makes Shamita very angry. Both  Nishant and Shamita get into a very heated-up argument.

Shamita locks herself up in the bathroom and gets emotional but Bigg Boss asks her to come to the medical room.  Neha supports and helps Shamita to calm down.

In the evening, Bigg Boss tells the connections that the punishment is over.

Later, everyone discusses among themselves their point of view on today's argument.

© Copyright tellybest.com, 2020, 2021. All Rights Reserved. Unauthorized use and/or duplication of any material from tellybest.com without written permission is strictly prohibited.
Cached Saved on: Monday 6th of December 2021 03:05:16 AM