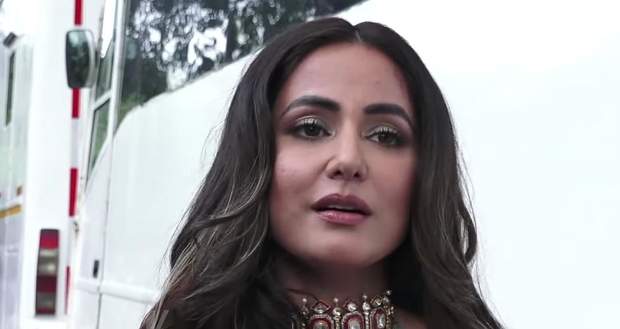 She tells Zeeshan to bring the sweets from the storeroom and tells them to feed each other.

She gives all the contestants a surprise by showing them video messages from their loved ones.

Afterwards, she tells them that they should point out a contestant they want to target in the third week with a valid reason and tells them to spray foam in their face as a task.

Shamita Shetty is targeted the most in the task while Hina says that they are seeing her as a competition.

Furthermore, she asks the contestants to choose who is the 'Biggest Fattu (coward)' between Pratik Sehejpal and Zeeshan.

Hina takes her leave after advising them to have their individual opinions.

Later, Muskaan Jattana tells Nishant that Raqesh Bapat is being friendly with her and that she doesn't want that.

Neha tells Pratik that he speaks very hardly about his friends while he replies that he doesn't sugarcoat things as she does.

Raqesh tells Shamita that Neha has a soft spot for Pratik while Millind also tells Neha that she is being seen chasing Pratik which creates an argument between the two.

At night, Pratik, Moose, Nishant and Akshara Singh discuss and think that the show is biased towards Neha and Shamita.

After midnight, Nishant gets sick after having a breakdown and gets called into the medical room.