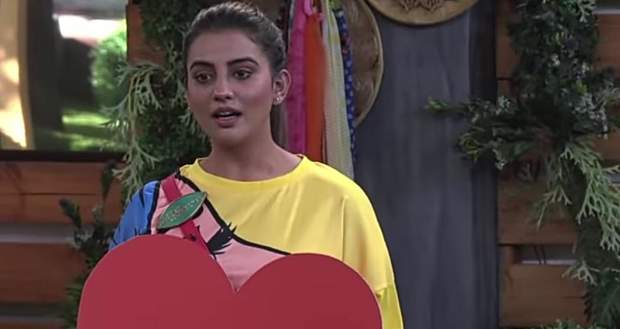 Raqesh Bapat requests Akshara Singh to help Shamita Shetty cook as she is not feel good but Akshara refuses.

Nishant Bhat tells Pratik Sehejpal to talk to Muskaan Jattana but Moose refuses after which Pratik talks about the matter with Akshara.

Later, Akshara says that Neha Bhasin is always talking to Pratik while Neha also accused her of being too friendly with Millind Gaba.

Akshara convinces Moose to talk out her problems with Pratik.

Bigg Boos announced that connections are very important for the game and informs them that they are free to choose the partner of their liking.

In the task, the girls will have to give the heart to the boy with whom they want to make a connection and the boy has the choice to accept or reject the girl.

Neha says that she feels like Millind is judging her and says that she doesn't want to make a connection with anyone which creates an argument between them.

Afterwards, Pratik breaks the heart that he had earlier accepted from Akshara.

Akshara again gives the heart to Pratik but he again breaks it.

Pratik sees Akshara getting teary and goes to comfort her after which he apologises to Millind for making a connection with Neha.

Later, Akshara cries saying that she's remembering the outside relations as Nishant and Moose comfort her.

In the evening, Pratik praises Akshara to Neha while she makes fun.