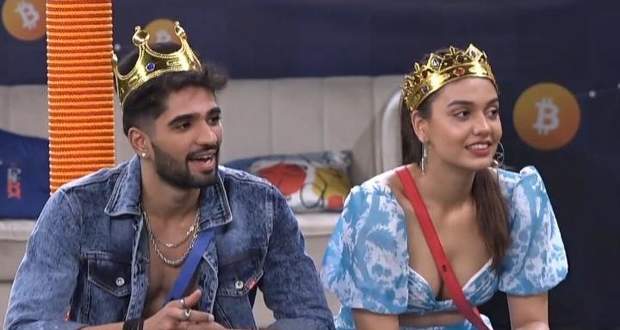 Today's Bigg Boss OTT 26 August 2021 episode of season 15 starts with (Day 18) everyone waking up to the song 'Masti Ki Paathshala'.

Millind Gaba taunts Neha Bhasin while Shamita Shetty tells him that Neha feels guilty for what she did.

Later, Neha goes to apologise to Millind while getting emotional and says that he is a changed person because of her.

Divya Agarwal reads the instructions for the next Captaincy task in which Divya and Zeeshan Khan will rule the world and will have to give red flags to the contestants who break the rules and the connection having the least amount of flags will get the chance to become Boss Lady and Boss Man.

During the task, Bigg Boss announces to spice up the game while Pratik thinks to erase the rules from the board.

He distracts Divya and Zeeshan while Nishant erases the rules and steals the marker.

Pratik and Nishant destroy the flags and board while Zeeshan gets into a physical fight with them.

Divya accuses Pratik of starting the fight first while Muskaan Jattana stands up for Pratik against her.

Zeeshan instigates Pratik to fight and pushes him while others try to stop Pratik from reacting.

Later, Bigg Boss announces that the task has been cancelled and says that Zeeshan is evicted from the show for using physical strength.

Raqesh Bapat advises Shamita to go to Divya but she refuses saying that she has trust issues.

Divya tries to talk to Nishant after which she confronts Moose.

© Copyright tellybest.com, 2020, 2021. All Rights Reserved. Unauthorized use and/or duplication of any material from tellybest.com without written permission is strictly prohibited.
Cached Saved on: Tuesday 2nd of August 2022 07:59:50 AMCached Disp on: Thursday 11th of August 2022 12:04:06 PM