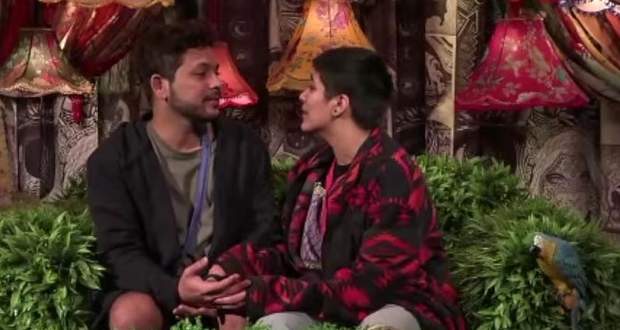 Today's Bigg Boss OTT 31 August 2021 episode of season 15 starts with (Day 23) Bigg Boss announcing that the housemates will get only 2 hours of cooking gas and no gym due to their Saturday performance not being liked by the audience.

Pratik Sehejpal and Neha Bhasin get into a fun argument and throw water on each other.

Later, Akshara Singh talks to Neha and sorts out their misunderstandings while she reveals that she used to like Pratik.

Nishant Bhat comes there and have fun with Neha while she also joins in on the drama.

Later, Neha discusses the things Akshara told her with Pratik and tells him that Akshara likes him.

Afterwards, Divya Agarwal tries to convince Raqesh Bapat to give her a paint tattoo while everyone teases him.

Bigg Boss announces that he is giving a chance to all the contestants to change their connection and make a new connection with Divya which makes everyone shocked.

Nishant promises Muskaan Jattana that he will never break their connection and they together convince Pratik to prank Neha.

Neha and Pratik get into an argument while he reveals that he was pranking her and she beats him with her shoes.

Later, Neha and Nishant discuss and argue about their point of view while others look on.

Further, Bigg Boss announces the new nomination task and announces that the connections go in the confession one by one.

Bigg Boss one by one asks the connection that they can choose between the two of them on who wants to see the letter by their relations and the other one will be nominated.

Later, Raqesh and Moose read the letters from their relatives and get emotional among other contestants.

Housemates celebrate Akshara's birthday after which Shamita finds out that Raqesh has Divya's lipstick and gets upset with him.

Moose talks to Nishant and asks him why he's irritated at her but he doesn't give her an answer after which she talks to Pratik and tells him that maybe Nishant is scared her feeling for him.