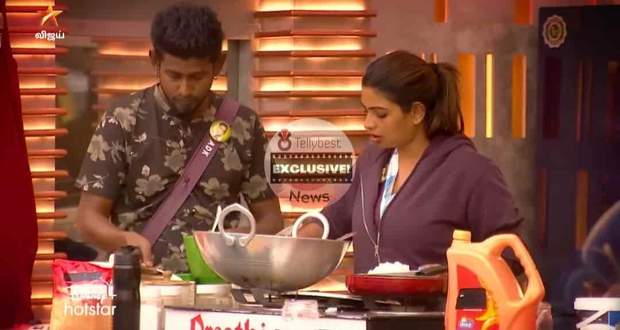 Today's Bigg Boss 6 Tamil 10th November 2022 episode (day 31) starts with the housemates commencing the day with enthusiasm. They then perform the daily chores and get ready for the tasks of the week.

The day's task is to collect the sweet boxes that enter the BB house through the runway.

All the contestants of both teams compete with each other to collect the boxes.

They indulge in physical fights which injure some contestants.

Azeem lies down on the runway to pick up the gift and Amuthavanan tries to pull him out.

Manikandan takes one box and passes it to Vikraman and they take it to their team.

Dhanalakshmi argues with Azeem and complains that he is not providing space for the other contestants to take the box.

Azeem tries to justify to her that it is a game and the teammates must try hard to obtain the box.

Later, BiggBoss announces a truth or dare game where all the contestants are asked to choose between truth and dare.

The one who chooses truth will be asked to answer a critical question in front of all.

The one who chooses to dare must perform a difficult task in the BB house.

Janani chooses truth and the big boss questions her to pinpoint the one who wears a good-hearted person mask.

She picks ADK and justifies her stand. This hurts him and he tries to give justification to her. He states that he believes Janani to be her sister and treats her so.

Other contestants pacify him as he gets emotional and opens up his feelings.

Then, Dhanalakshmi and Amuthavanan gossip about the activities of Ram and Azeem.

She then adds fuel to Amuthavanan's burning fire which frustrates him more.