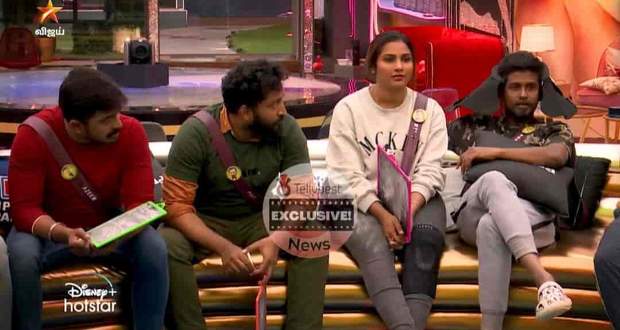 They move on to the task of the day. Some housemates prepare sweets in their factories.

Others wait near the runway for the sweets to arrive. All the contestants indulge in a physical fight to get the box.

Manikandan pulls away the box from Amuthavanan. During the action, Amuthavanan claims that he was injured by Mani.

Manikandan defends the point and tells that he hasn't done that. This ends up in a huge argument between both.

Maheshwari states that Manikandan is handling people and playing the game in a rough manner.

Manikandan says that Amuthavanan is trying to frame them for a mistake that he has not any.

Amuthavanan gets emotional and cries about the happenings. Manikandan was moved by his actions and apologizes to him.

Later, the contestants select two contestants who have been less active throughout the weeks in the task. Each contestant selects one by stating a fair reason.

Vikraman chooses Janani and tells her that she is highly dependent on others in the task. She demands more explanation.

Vikraman tries to escape her but Amuthavanan enters to justify and support her. This breaks into an argument.

This frustrated Jannany and she cries over this. Ayesha pacifies her and calms her down.

ADK then chooses Jannany and apologizes to her for not mistaking him.

Likewise, all the other contestants select one co-contestants who haven't performed well.

© Copyright tellybest.com, 2022, 2023. All Rights Reserved. Unauthorized use and/or duplication of any material from tellybest.com without written permission is strictly prohibited.
Cached Saved on: Monday 21st of November 2022 06:11:46 AMCached Disp on: Wednesday 7th of December 2022 04:07:17 PM