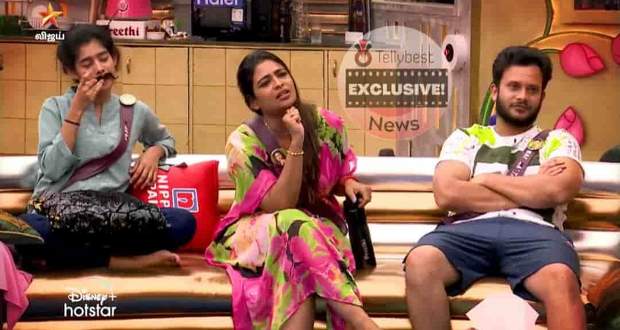 Today's Bigg Boss 6 Tamil 12th November 2022 episode (day 33) starts with the housemates continue playing their tasks in a successful manner and they near the completion stage of the task.

Janani and Robert Master are elected as the worst performers of the week and they are moved to jail.

Manikandan and Amuthavan are ranked as the best performers of the week. The team Kanna Laddu thinna aasaiya is declared the best-performing team of the week.

Later, the next day Janani and Robert Master move out of jail after completing the punishments.

The contestants get ready for the weekend episode to meet Kamal Hasan. Kamal Hassan gave a stunning entry on the sets of BB6.

He enters and delivers a short message to the viewers. He then interacts with the public and asks for their review of the contestants.

All the contestants answered the question. Manikandan states that there is no one in the home like that. Kamal then warns that people are watching the show and they know what everyone speaks behind.

He then announces the name of the contestants who are out of the danger zone.

Then the next task of the week is the agreed and disagreed task where one statement is provided to the contestants and they must state their opinion of agreement or disagreement.

The first statement put forth is about Amuthavanan, Azeem reads the card with the statement which states that "Is Amuthavanan doing personal attack?"

Some agree with the point and some disagree. Shivin and Vikraman state their reasons.

Vikraman says that he is employing his sense of humor to criticize or attack other contestants personally.

The next question is about Dhanalakshmi which states that "Will Dhana be slapped by the public for all her activities in the house?"

At the end of the task, Kamal questions the contestants about each other's activities in the house.

He then announces that Vikraman, Azeem and ADK move to the safe zone and is free from elimination this week.

© Copyright tellybest.com, 2022, 2023. All Rights Reserved. Unauthorized use and/or duplication of any material from tellybest.com without written permission is strictly prohibited.
Cached Saved on: Monday 21st of November 2022 07:39:07 AMCached Disp on: Tuesday 29th of November 2022 11:02:10 AM