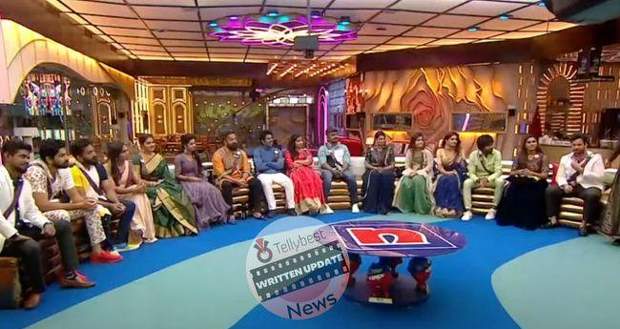 Then, Ulaganayagan Kamal Hassan gave a stunning entry on the sets of BB6. He delivers a short message to the viewers. He then interacts with the public and asks for their review of the contestants.

The viewers share their insights about the show and suggest Kamal Hassan ask some questions based on the events that occurred during the week.

Later, Kamal Hassan interacts with the housemates and they compliment Kamal Hasan for his attire.

He starts the show with a small task where the housemates must elect the ones who are fit and not fit to win the Bigg Boss Tamil 6 title.

All the housemates rank their co-contestants based on their activities in the house. Azeem receives the highest amount of downvotes in the task.

Kamal Hassan indirectly warns him about his companions and tells him that no one is trustworthy around him.

Then, he addresses Dhanalakshmi and warns about her attitude. He states that she has played an unfair game and she is not fit for the best player title.

Kamal then announces that he removes the nomination-free card from Dhanalakshmi and provides it to Vikraman. This makes her emotional and Kamal advises her on this.

Then, Ram and Maheshwari are found to remain in the danger zone. Kamal enquires about their mindsets.

Both of them remain tense. They share their view about the opportunity they received in the Bigg Boss house.

Further, he questions all the contestants on who will be saved. All the housemates share their views.

Vikraman, Rachitha and ADK guess that Ram will be saved. Manikandan and Kathir think the Maheshwari would be saved. Other housemates share their opinion.

Kamal Hassan appreciates their open-mindedness and then reveals the name of the evicted contestant from the Bigg Boss house this fourth week.

Maheshwari is this week's elimination from the Bigg Boss Tamil Season 6. She is expected to have obtained the least public votes and is out of BB6 today.

© Copyright tellybest.com, 2022, 2023. All Rights Reserved. Unauthorized use and/or duplication of any material from tellybest.com without written permission is strictly prohibited.
Cached Saved on: Monday 21st of November 2022 03:20:51 AMCached Disp on: Wednesday 7th of December 2022 03:07:44 PM