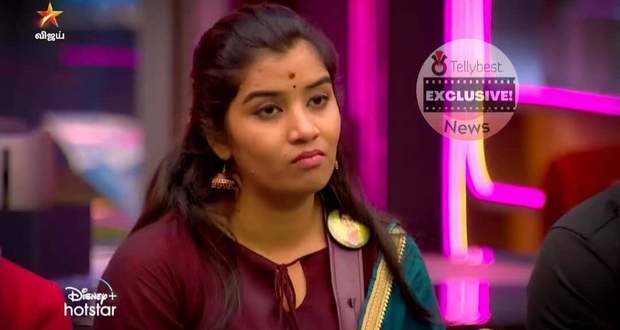 The contestants split their tasks for the weeks into different groups based on their priorities.

Later, the nomination process of the week gets started and the housemates nominate each other.

Each contestant nominates two other housemates for the elimination process. They nominate others based on their performance the previous week and their activity in the house.

Dhanalakshmi gets nominated by the majority of the contestants. The housemates choose her reasoning for her unfair gaming and dominating attitude.

Others like Azeem, Nivashini, Queency, Robert, Aaysha, Jannany and Kathiravan also get nominated by housemates based on their activities in the house.

Dhanalakshmi's nomination free card was removed from her by Kamal and was given to Vikraman and he is free from nomination this week.

During the nomination process in the confession room, Dhanalakshmi breaks out and explains that she is feeling guilty inside the house. She explains her mindset and situation to Bigg Boss.

Later, three housemates compete with each other for the captaincy task. The one who wins the captaincy task will hold the power to organize the house for the upcoming week. The captain of the week will be from eliminations.

Manikandan finishes the task first and is declared the captain of the week.

Aaysha and Nandini gossip about Azeem and state that he is acting in the Weekend episodes to mask his character.

© Copyright tellybest.com, 2022, 2023. All Rights Reserved. Unauthorized use and/or duplication of any material from tellybest.com without written permission is strictly prohibited.
Cached Saved on: Monday 21st of November 2022 02:41:45 AMCached Disp on: Wednesday 7th of December 2022 03:31:30 PM