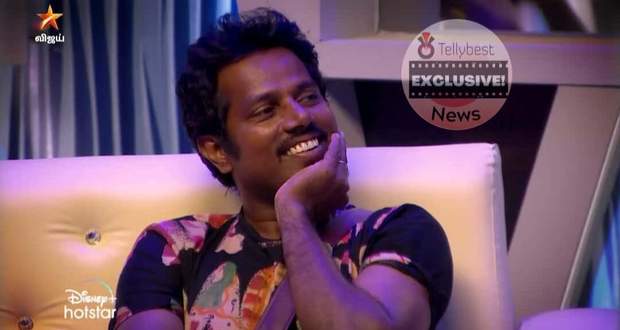 The three teams of the royal family, soldiers and servants split up among themselves and get ready to perform the royal museum task.

Robert master plays the role of king and decides big decisions in the house. Queen Rachitha takes care of other royal duties in the house.

All the other housemates take charge and put in more effort to play their roles efficiently.

As the members of the royal family arrive the soldiers like ADK, Dhanalakshmi, Aaysha, Queency and Nivashini ensure their security and protection.

The royal family takes a look over the royal museum and its treasury.

Later, the servants' team serve the royal family delicious dishes. Rachitha complains about the dishes served by the servants. She states that the curry has only salt in it.

King Robert throws the plates with food in frustration which irritates others.

Further, a dispute arises between Commander in chief Azeem and Advisor Vikraman over the food.

They engage in a furious argument which tenses everyone in the house. Kathir tries to pacify their fight but in vain.

The problem of adding salt to the curry fires up and Shivin accepts her mistake on the behalf of the cooking team.

Then, Bigg Boss calls the commander-in-chief and Queen to the confession room individually.

He announces that the royal treasury is lack money and that the only way to save that is to steal royal things and save them in the treasury.

He assigns both the queen and commander-in-chief to steal the stuff and adds it to the treasury.

They both are given a map puzzle to identify each other. They find each other and plan together to steal the stuff and add it to the treasury.

© Copyright tellybest.com, 2022, 2023. All Rights Reserved. Unauthorized use and/or duplication of any material from tellybest.com without written permission is strictly prohibited.
Cached Saved on: Monday 21st of November 2022 01:15:20 AMCached Disp on: Wednesday 7th of December 2022 04:36:06 PM