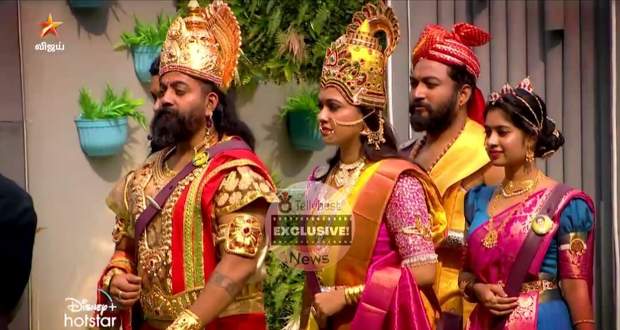 Shivin has added extra food to the salt, resulting in a great conflict between the contestants in the house.

Azeem and ADK continue their argument in the house over the issue.

ADK states that it is an insult to someone to discuss issues while having food.

This develops into an argument again, and ADK says there is no genuine connection between them now.

Next, the task is announced by the biggboss to Shivin and Dhanalakshmi.

Shivin being the servant is supposed to steal the royal jewels and preserve them without anyone noticing.

Dhanalakshmi is appointed to identify the royal family as the thief. She hides inside the cupboard to watch who is hiding the jewel.

Shivin hides the jewel inside the rice jar but Dhanalakshmi inside the cupboard notices it and informs the royal family.

Later, Shivin is punished by the royal family for breaking their trust and stealing stuff.

Then, the entertainment part of the royal family is exhibited in front of everyone.

King Robert and queen Rachitha dance in front of everyone to entertain them. Everyone enjoys their performance.

© Copyright tellybest.com, 2022, 2023. All Rights Reserved. Unauthorized use and/or duplication of any material from tellybest.com without written permission is strictly prohibited.
Cached Saved on: Monday 21st of November 2022 03:53:28 AMCached Disp on: Friday 9th of December 2022 03:50:10 AM