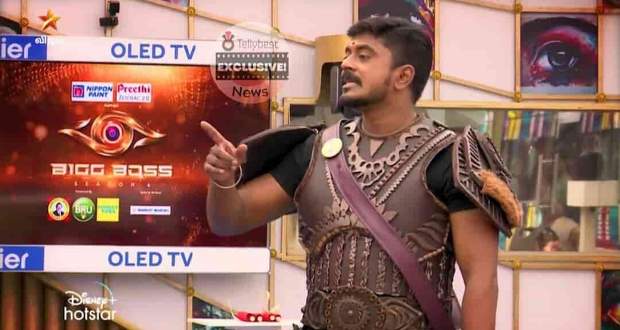 Today's Bigg Boss 6 Tamil 18th November 2022 episode (day 39) starts with the contestants performing their morning routines and getting ready for the day’s tasks.

This week's main assignment as the "Royal Museum work," is continued and is ending the conclusion.

The competitors split up into three teams. The royal family, troops, and servants make up the three teams.

The first group is made up of the six-person royal family, which consists of the king's commander-in-chief, the king, the queen, the prince, and the princess.

Bigg Boss calls Shivin to the confession room and appreciates her for making the task more interesting.

Then, Bigg Boss calls Vikraman to the confession room and asks him to make a decision on changing the role of king as he is not perfectly playing the task.

Vikraman strategically uses his power and knowledge and releases a statement that impresses everyone.

Later, BiggBoss announces all the contestants to express their secret duties. Rachitha, Azeem and Kathir reveal their secret role.

Robert gets emotional as he feels cheated and broken. He states that he trusted everyone but was cheated then.

All the contestants try to pacify and console him but in vain. Rachitha apologizes to him, but Robert doesn't accept her words.

Aaysha and Manikandan gossip about the people in the house as each has a different strategy to perform their tasks.

© Copyright tellybest.com, 2022, 2023. All Rights Reserved. Unauthorized use and/or duplication of any material from tellybest.com without written permission is strictly prohibited.
Cached Saved on: Monday 21st of November 2022 01:04:56 AMCached Disp on: Thursday 1st of December 2022 02:21:58 AM