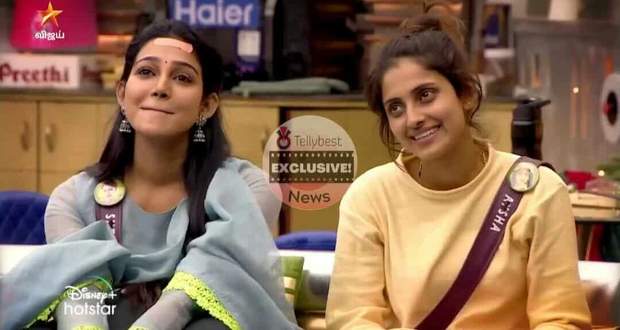 Manikandan is the captain of the week as he competes with Nivashini and Queency and wins the task. He becomes the first to fill the jar with juice crossing the rope hurdles. Nivashini gave him a tough fight.

The chores team is split up among the housemates and they get back to work. Conflicts arise among each other while performing the chores.

The first task of the week is announced by Bigg Boss. The housemates fire up to give their best this week and perform well in the task.

The task of the week is announced as "Television task" where the contestants split up into two TV channels named "Antha TV" and "Intha TV".

Both teams are expected to perform all the events that happen on television throughout the day. This includes programs like Rasi palan, news, cooking show, drama and debate shows.

Amuthavanan becomes the fortune teller and puts word about everyone in the house.

Nivashini judges the cooking show and the recipes made by Manikandan and Nandini.

Shivin, Vikraman, Azeem and Dhanalakshmi participate in the debate and argue with each other. This becomes a huge conflict in the house.

Later, Azeem comments on Maheshwari's judging skill which frustrates her. She argues with him and both end up in a heated debate.

Dhanalakshmi, Janany, Robert master, and Amuthavanan continuously gossip about each other in the house. Amuthavanan states that Kathir is one of the tough contestants in the house which is agreed by the others.

© Copyright tellybest.com, 2022, 2023. All Rights Reserved. Unauthorized use and/or duplication of any material from tellybest.com without written permission is strictly prohibited.
Cached Saved on: Monday 21st of November 2022 06:12:26 AMCached Disp on: Wednesday 7th of December 2022 11:17:24 AM