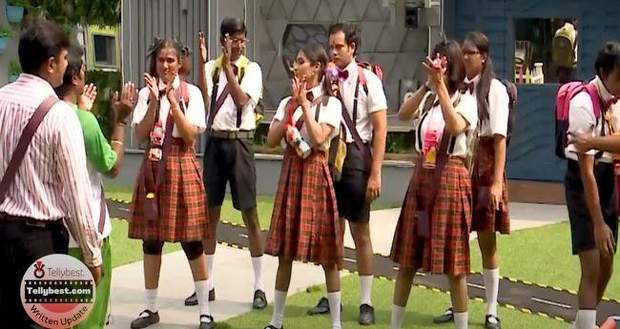 Today's Bigg Boss 6 Tamil 21st December 2022 episode (day 72) starts with all the contestants gathering together and talking about their family. Rakshitha shares with everyone that her uncle and aunt mostly brought her up and that she was ashamed that her father is a driver until recently.

Rakshika tells everyone how much her father used to earn, how her mother did tailoring jobs to earn money for her daughter’s education. She tells everyone that now her wish is to take good care of her mother.

Danalakshmi shares her story, about how her mom supported her throughout her life even when she was not doing well in school.

In the morning (Day 73) everyone wakes up and dances for the wakeup song.

Kathir is a teacher for today’s task so Shivin and Danalakshmi are bothering him near the cycle stand. Danalakshmi lets the air out of the principal’s cycle tire.

Everyone is gathered in the classroom. Amudhavanan is the principal as well as the carnatic music teacher today. The contestants who are high school students today constantly pester him during the class.

Later, Amudhavanan (music teacher) is teaching all the students individually how to sing saaree gamma song. In the meantime some students are scribbling things on the black board.

During break time, Kathir (math teacher) goes to the washroom and sees that some students have written “Loosu English teacher” on the bathroom doors. So he scolds the students who are there and Mynaa (teacher) pinches Manikandan (student) for his actions.

Manikanan (student) goes to Amudhavanan (principal) and complains about Mynaa (teacher) saying that she pinched him. So Amudhavanan is questioning both of them.

Danalakshmi gets very defensive and says that she will remain quiet throughout the day and not play her role. She also adds that at the end of the day if someone complains about her ,she will not accept it.

Both of them get very defensive and Danalakshmi walks away angrily.

In the afternoon, the students are gathered for math class (Kathir). Rakshitha and Shivin excuse themselves and go to the washroom. Manikandan also runs behind them. Shivin and Manikandan together write “Boomer Uncle” and many more things in the washroom doors again.

In the next class, the students are given a painting competition. They have to make a painting with a social message and explain it to everyone. The teachers are the judges for this task.

Shivn makes a painting about education for female children and wins the competition.

In the evening,  students are gathered in class for Mynaa (English teacher). She gives all the students tongue twisters. After the task ends for the day everyone gathers in the classroom.

Everyone has to choose one best teacher and best student based on today’s performance. Amudhavanan, Manikandan and Vikraman are chosen as teachers for tomorrow’s task.

Luxury task rules are being narrated. This week it will be one person versus another person. Contestants need to wear costumes that are given to them and stand in the middle of the circle. There are numbers written around the circle

When the buzzer rings, the contestant has to take their competitor to the number which is around the circle. The number stands for the amount of points they want to win.

At the end of the day, another new task is given. Since it’s been more than 70 days since they have been in this house, everyone needs to write a letter to a person who comes to their mind when they think of victories, losses and the pain that they have faced here.

Everyone gets very emotional as they are writing their letter.

Mynaa reads the letter that she wrote for her husband. She tells about how she misses him.

Danalaksmi writes a letter to her mother. She tells about how much she misses talking to her. She starts crying as she reads her letter. She wishes that her mom is proud of her.

Shivin writes a letter to her sister. She starts crying emotionally as she reads the letter she wrote. She asks her sister to take care of the family while Shivin is here.

ADK writes a letter to his son. He tells about how he misses his son as they have been separated for two years but thinks about him every single day. He requests his son to forgive him one day.

Amudhavanan writes a letter to his wife. He tells about how he wishes to only give her happiness. He requests his family to forgive him for not being there with them.

Rakshitha writes a letter to her mother. She cries emotionally and thanks her mother for standing by her all through her life. Hearing her letter everyone gets very sad.

Will Danalakshmi and Kathir get into a fight again tomorrow?

© Copyright tellybest.com, 2022, 2023. All Rights Reserved. Unauthorized use and/or duplication of any material from tellybest.com without written permission is strictly prohibited.
Cached Saved on: Wednesday 25th of January 2023 10:58:34 AMCached Disp on: Monday 6th of February 2023 04:43:03 AM